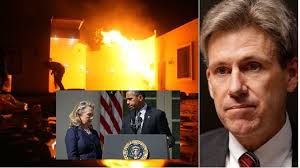 PJMedia is reporting of an interview with these diplomats:

The former diplomats inform PJM the new revelations concentrate in two areas — what Ambassador Chris Stevens was actually doing in Benghazi and the pressure put on General Carter Ham, then in command of U.S. Africa Command (AFRICOM) and therefore responsible for Libya, not to act to protect jeopardized U.S. personnel.

Stevens’ mission in Benghazi, they will say, was to buy back Stinger missiles from al-Qaeda groups issued to them by the State Department, not by the CIA. Such a mission would usually be a CIA effort, but the intelligence agency had opposed the idea because of the high risk involved in arming “insurgents” with powerful weapons that endanger civilian aircraft.

Hillary Clinton still wanted to proceed because, in part, as one of the diplomats said, she wanted “to overthrow Gaddafi on the cheap.”

This left Stevens in the position of having to clean up the scandalous enterprise when it became clear that the “insurgents” actually were al-Qaeda – indeed, in the view of one of the diplomats, the same group that attacked the consulate and ended up killing Stevens.

Now this is interesting in light of the fact that Greg Hicks, the deputy chief of mission in Libya, testified before Congress on May 8, testified that Stevens was sent to Benghazi by Clinton to convert the outpost into a permanent diplomatic facility.

Rep. Lankford (R-OK) questioned Hicks, and he explained: “According to [Ambassador] Chris [Stevens], Secretary Clinton wanted Benghazi converted into a permanent constituent post. Timing for this decision was important. Chris needed to report before Sept. 30, the end of the fiscal year, on the physical and the political and security environment in Benghazi to support an action memo to convert Benghazi from a temporary facility to a permanent facility.”

In fact, Jerome Corsi writes, “Hicks explained the directive came from the State Department Office of Near Eastern Affairs, headed by Acting Assistant Secretary Beth Jones, that funds were available to be transferred to Benghazi from a State Department fund set aside for Iraq available, provided the funds transfer had been obligated by September 30.”

“He further testified that in May 2012, during his exit with Secretary Clinton following his being sworn in as U.S. Ambassador for Libya, Stevens promised he would give a priority to making sure the U.S. facility at Benghazi was transformed into a permanent constituent post,” Corsi added.

While damaging to Clinton, it was omitted from the State Department’s Accountability Review Board report. Obviously that would add credibility to Raymond Maxwell’s claims that he believes that Clinton and her staff were running the show on the ARB report’s investigation, not an independent board. Should these claims be brought to light, they would be far more explosive than Hicks’ testimony. It also would add credibility to the theory that the Obama administration was running an international Fast and Furious program.

According to one of the former diplomats, he believes that what took place is similar to the Mike Nichols film Charlie Wilson’s War, which is about a clueless congressman who supplies Stinger missiles to Afghan guerrillas. “It’s as if Hillary and the others just watched that movie and said ‘Hey, let’s do that!’” the diplomat said.

He also believes the leaked emails about former CIA director David Petraeus’s adultery with his biographer Paula Broadwell was intended to silence him., especially since Petraeus had stated that the command to stand down could have only come from Barack Obama. Petraeustestified that he knew Benghazi was terrorist attack instantly.

Additionally, there is indication that ARFICOM had Special Ops “assets in place that could have come to the aid of the Benghazi consulate immediately (not in six hours).”

Apparently General Ham was told by the White House not to send aid to the men under attack in Benghazi, but he disobeyed the orders. However, the White House then “called his deputy and had the deputy threaten to relieve Ham of his command,” according to the diplomat.

Ham quietly retired as head of AFRICOM in April 2013.