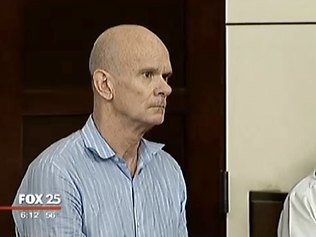 Oh no, this is not an AMC drama. This is real life. Former Democratic Massachusetts State Representative Stephen Doran has been busted with 500 grams of Crystal Meth which has an approximate street value of $50,000. Mr. Doran would seem to share an eerie resemblance to the character “Walt” in the AMC hit drama Breaking Bad. Mr. Doran is terminally ill and is a tutor at the local school much like the AMC character who is a High School science teacher who determines to make it as a drug dealer when he gets a terminal diagnosis.

Stephen Doran, a former Bay State representative and math tutor, has been charged with dealing drugs.

Investigators say Doran was dealing methamphetamine, and they say he received a big shipment at the school where he tutored.

Doran, now 57, was just 23 in 1980 when he began seven terms at the State House, representing Lexington and Lincoln.

Doran left politics to be a vice president at a major Boston bank; a past some neighbors didn’t even know about.

“If he has these other kind of jobs, he’s obviously had some problems in his life,” said John Miles, a neighbor.

A state trooper’s report says police found drugs were being mailed to Doran at the middle school where he worked.

Inside was a package of heat-sealed freezer bags containing nearly 500 grams of methamphetamine — known on the street as crystal meth.

Police then obtained a search warrant and came to a condo Doran leases in Dorchester. Inside, police say they found another 38 grams, along with cash.

Doran’s lawyer says he cares for his elderly mother and is not likely to run.

Match Charter Middle School says Doran passed a criminal background check and has been tutoring kids at the school for nine months.

It is also being reported that Doran has been undergoing chemotherapy for State III cancer. Don’t think for a minute that television does not inspire criminals. Another episode of Breaking Bad was about the use of ricin to get rid of a rival drug dealer. With news of an arrest, tied to the ricin incidents, that was made on Thursday I would not be at all surprised if Matthew Ryan Buquet ends up being a fan of the show.

As if someone would even bother to ask him that question… Let’s not forget that sweetheart deal that the legislators extended to Hollywood several months ago.

Some things are considered to be best swept under the rug.