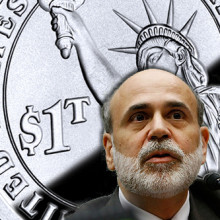 The Federal Reserve does not like to make public that the biggest beneficiaries of fiat currency are foreign banks, operating inside the United States. However, with the latest Quantitative Easing scheme, Fed Chairman Ben Bernanke has provided these foreign banks, not U.S. banks, with an all-time high amount of reserves, surpassing $1 trillion for the first time, or as Tyler Durden points out “$1,033 billion to be precise.”

Two years ago, Zero Hedge first made the observation that the bulk of Fed reserves (also known simply as “cash created out of thin air” because money is first and foremost fungible no matter what textbook theoreticians may claim, and the only cash allocation preference is the capital allocation IRR analysis) had been parked not with US banks, but with foreign banks with US-based operations. We followed that with more analyses, showing explicitly how the Fed was providing a constant cash injection to foreign banks courtesy of the rate on overnight reserves which is the amount Fed pays to banks that hold reserves with it, as the bulk of reserves continued to end up with foreign banks – a situation set to become a huge political storm some time in 2014-2015 when the IOER has to rise and the Fed is “found” to have injected tens of billions of “interest” not into US banks but in foreign banks operating in the US, and which then can upstream the “profits” to insolvent offshore domiciled holding companies.

So it was our expectation that while if not slowing down its rate of money-creation (i.e., reserve-production) – something that won’t happen for a long time as it would crash the stock market – the Fed’s reserves would at least revert to being accumulated at US-based banks. No such luck. In fact as the latest H.8 report demonstrates, as of the most recently weekly data, the Fed’s policies have led to foreign banks operating in the US holding an all time high amount of reserves, surpassing $1 trillion for the first time, or $1,033 billion to be precise.

This means that, as we expected several months ago, the only recipient of ongoing Fed money printing are not US banks, but foreign banks operating in the US.

Charts at the Zero Hedge website help you to see clearly what is taking place. I found this one to be the most telling about the differences of more cash being held by foreign banks than cash held by domestic banks.

Look, this is a gigantic counterfeiting operation. It has been since its doors opened in 1914. The FED makes sure that big banks don’t get into trouble. If a big bank happens to be foreign owned, so what? The important thing is that the money goes to the big banks. They are too big to be allowed by the FED to fail.

Does Congress know about this? No. Would it care if it did know? No.

Does the public know? The public has never heard of the Federal Reserve. Would the public care if it did know? No. It cares about Dancing With the Stars.

The banking system is a cartel. The Federal Reserve is the enforcing agent. It keeps the cartel’s largest members flush with money. It makes sure that nothing happens to upset any liquidity apple carts. It makes sure that there are no overnight bank runs by hot-money lenders — not you and I, of course: the hedge funds and other suppliers of overnight money.

This is nothing more than bailing out foreign banks that are operating on American soil and we are the fools that are told by the FED that it isn’t any of our business.