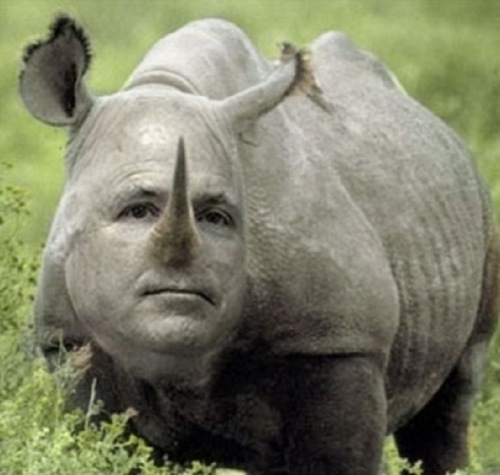 RINO Sen. John McCain was one of the sponsors of the National Defense Authorization Act that gives “authority” to the president and military to arrest and indefinitely detain U.S. citizens without charge or trial.

So it really shouldn’t surprise us that he favors capitulation on raising our national debt ceiling — yet again — and is bawling about conservatives Republicans “pushing too far.”

Tactics for dealing with the government’s budget and debt became the latest quarrel In a string of them between McCain —sometimes joined by other traditionalist Republicans —and Tea Party champions such as Ted Cruz of Texas, Rand Paul of Kentucky, Mike Lee of Utah and Marco Rubio of Florida.

Those four won Senate seats by defying the party establishment, and are shaking up the tradition-bound Senate with no-compromise, no-apology stands on key issues like debt and deficits, government spending and the use of drones in the war on terrorism.

McCain himself has defied Republican orthodoxy at times. But he was the party’s 2008 presidential nominee, and he now is among those who say a minority party will accomplish little in the Senate if it can’t find ways to cut deals with the majority.

Cruz, who like Paul is weighing a 2016 presidential bid, renewed his taunts of the party establishment in a speech Thursday on the Senate floor. The more accommodating Republicans, he said, are in cahoots with Democrats to raise the government’s borrowing limit by disabling the GOP’s ability to mount a filibuster threat that could be used to extract spending cuts from Democrats and the White House

[…] Earlier in the day, Lee angered McCain with similar remarks. Lee said Republicans should block a House-Senate conference designed to resolve budget differences because it might ease the Democrats’ effort to raise the government’s borrowing limit. That rankled the sometimes cantankerous McCain, of Arizona. He said the Tea Partyers’ tactics could embolden Democrats who are threatening to change Senate rules that now allow the minority party — or even just one senator— to block various actions.

“That would be the most disastrous outcome that I could ever imagine,” McCain said.

For months, Democrats have complained about Republicans blocking or delaying confirmation of top White House nominees, including some federal judges. Democrats say the impasse over a budget conference is further evidence of a small group of senators in the minority abusing their powers to block actions that in the past would have gone forward after a few speeches.

Supporters of the Tea Party-backed lawmakers say the ongoing IRS and Benghazi controversies have vindicated their sharply partisan, uncompromising views. Republicans cite the controversies as examples of Democratic overreach and obfuscation.

This week’s budget quarrel follows a high-profile split between Tea Partyers and champions of a big defense program over drone attacks, and an intra-GOP disagreement over gun control tactics. It involves an obscure procedural battle and arcane rules governing the congressional budget process. Democrats want to set up an official House-Senate negotiating committee to iron out the gaping differences between the budget plans passed by the Democratic-controlled Senate and the Republican-controlled House.

Cruz, Lee and others say they fear House and Senate leaders will use the budget measure to engineer a scenario in which an increase in the government’s borrowing cap could pass the 100-member Senate by a simple majority instead of the 60 votes typically need to overpower the minority on an issue.

McCain and others, like Budget Committee Chairman Patty Murray, D-Wash., note that House Republicans can block any move by Democratic negotiators to engineer a filibuster-free debt limit increase.

“Isn’t it a little bizarre,” McCain said Wednesday. “Basically what we are saying here on this (Republican) side of the aisle is that we don’t trust our colleagues on the other side of the Capitol who are in the majority, Republicans.”

At a Tea Party rally last month in Texas, Cruz taunted fellow Republicans after the Senate rejected a call for background checks on virtually all prospective gun buyers.

Cruz and other Tea Partyers had threatened to filibuster the gun legislation and keep it from coming to the Senate floor for votes. Other Republicans said the smarter political move — which eventually prevailed — was to let the votes take place, and have a few Democrats join Republicans in rejecting the wider background checks. Cruz suggested that Republicans who favored proceeding with the votes were “a bunch of squishes.”

That earned Cruz a rebuke from the conservative Wall Street Journal editorial page — gleefully retweeted by McCain. “Would it have been right for us to not even debate in light of the Newtown massacre?” McCain said.

[…] Democrats say the debt ceiling must be raised to pay for expenses already incurred by Congress. Failing to raise the ceiling, they say, would trigger a catastrophic default on U.S. obligations.

McCain scuffled with the tea party senators in March after Paul launched a filibuster to warn of the threat of unmanned drone attacks against U.S. citizens on American soil. McCain referred to newcomers like Paul and Cruz as “wacko birds” and said their fears of drone strikes against Americans were “ridiculous.”

“It has been suggested that we are ‘wacko birds,’” Cruz said Thursday. “I will suggest to my friend from Arizona there may be more wacko birds in the Senate than is suspected.”

The split between McCain, 76, and next-generation, 40-something potential 2016 candidates like Paul, Cruz and Rubio also illustrates the broader GOP drift toward the right. McCain has spent decades in the Senate, mixing a penchant for confrontation with a capacity for bipartisan relationships and legislation; the new generation is feistier and more wary of compromise.