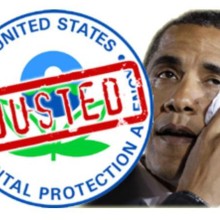 Currently on the front burner of scandals in the Obama administration are Benghazi, the Internal Revenue Service (IRS) targeting of conservative groups, and the AP scandal. Of course, Fast and Furious is also still very much alive. However, over the past week, two more scandals are coming to light and may be just as big as the others. One of those involves the Environmental Protection Agency (EPA).

Congressional Republicans are accusing the agency of giving unfair preference to environmental groups when it comes to information requests. They are comparing the behavior to that of the IRS in giving additional scrutiny to Tea Party organizations.

A letter was sent by Republican Senators David Vitter (R-LA), Jim Inhofe (R-OK), and Chuck Grassley (R-IA) along with Representative Darrell Issa (R-CA) to Acting EPA Administrator Bob Perciasepe last Friday. They have accused the agency of continuing to make conservative think tanks and state and local governments pay full price for obtaining documents under the Freedom of Information Act (FOIA), but routinely waiving those fees for environmental groups.

“This disparate treatment is unacceptable, especially in light of the recent controversy over abusive tactics at the Internal Revenue Service, which singled out conservative groups for special scrutiny,” the legislators wrote.

They specifically pointed out that, according to the data, ninety-two percent of fee waivers granted by the EPA were requests from environmental groups.

“The startling disparity in treatment strongly suggests EPA’s actions are possibly part of a broader effort to collude with groups that share the agency’s political agenda and discriminate against states and conservative organizations,” they alleged. “This is a clear abuse of discretion.”

They did want to make clear that there was no problem is issuing fee waivers and stated, “Congress provided a mechanism for FOIA requesters to obtain a fee waiver in an effort to promote public access to information. An agency may grant a fee waivers if the requested information is likely to contribute to the public understanding of governmental operations and activities, and if the requested information is not in the commercial interests of the requester. A key factor in qualifying for a fee waiver is the requester’s ability to convey information to other interested members of the public. For this reason, representatives of the news media, and educational or noncommercial scientific institutions whose purpose is scholarly or scientific research, should receive a fee waiver. Moreover, any requester may obtain a fee waiver if the information requested will aid the public in understanding the operations or activities of the government. Overall, it is critical that agencies make these determinations in an impartial and unbiased way.”

The committee reviewed over 1,200 pages of EPA correspondence between January 1, 2012 and April 26, 2013 and discovered that the EPA “manipulated the FOIA fee waiver process. Among the groups that had their fees waved were National Resources Defense Council, EarthJustice, Public Employees for Environmental Responsibility, Sierra Club, and National Wildlife Federation.

In contrast EPA denied ninety-three percent of the requests from the Competitive Enterprise Institute, a free market think tank. Overall fee waivers were only granted to other think tanks twenty-seven percent of the time. The EPA also denied nearly every request for a fee waiver from states and localities.

Issa and the Republican senators claim that “This is a clear abuse of discretion.”

As a result, the Inspector General was referred to by Perciasepe, but additional congressional scrutiny needed in the matter. The letter requests that the EPA provide the following documents no later than noon on May 31, 2013:

1. All FOIA fee waiver requests submitted to EPA between January 2 1, 2009 and May 16, 20 13. This production should include all requests for appeal.

2. All response letters from EPA to FOIA fee waiver requestors sent between January 21, 2009, and December 31, 20 12, including all responses to an appeal.

This has Democrats worried. As Julian Hattem writes, “President Obama’s nominee to lead the EPA, Gina McCarthy, advanced out of committee on a party line vote on Thursday, but Democrats worry about a Republican filibuster on the Senate floor.“