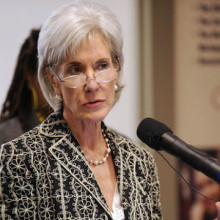 Back in September of 2012, I informed readers that Barack Obama’s Health and Human Services Secretary Kathleen Sebelius violated the Hatch Act by calling for the re-election of Obama in her official capacity. That was a violation of federal law and inside of two weeks she was set to campaign for Obama. She has yet to be removed from office. Now her actions are once again drawing scrutiny. She is being questioned because of her reported actions of soliciting donations from non-profit organizations that are “directly implementing” Obamacare.

Twenty-six members of Congress, including Michele Bachmann (R-MN) and John Culberson sent a letter on May 16 questioning the actions of Sebelius.

“We are deeply concerned with the recent reports that you have made numerous phone calls soliciting financial donations for non-profits that are working to enroll individuals in the new Patient Protection and Affordable Care Act exchanges (or ‘marketplaces’ as you now call them),” the letter began.

The letter also reminds Sebelius that if such calls were made, that she is once again violating federal law. “As you know, federal regulations specifically prohibit federal employees from fundraising in their official capacity. Cabinet members like yourself are prohibited from soliciting donations from anyone who conducts business with your Department.”

They then request answers to the following questions:

Well, what you do expect will actually come of this? I mean you have a known criminal who has violated federal law left at her post. Are we to believe that she wouldn’t go and break the law again?

See friends, this is what happens when criminals are allowed to be in office, break the law, and suffer no consequences as a result. Let’s just see what comes of this.