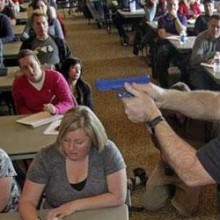 The Texas house and senate have passed a bipartisan bill that is on its way to Governor Rick Perry to sign which will allow schools to train and maintain teachers as “armed marshals” on campuses.

A bipartisan 28-3 Senate vote gave final approval to the marshals bill, which was proposed after the December mass shooting at Sandy Hook Elementary School in Newtown, Conn. It had already passed the House over the objection of the Texas State Teachers Association.

The bill allows school districts and charter schools to place one armed marshal on campus for every 400 students. After 80 hours of training, the marshals could bring a weapon on campus. Their identities would not be subject to public records law.

The AP claims that this bill follows a “relaxing” of gun restrictions.

This measure doesn’t help anyone because the gun must remain in a lockbox, not in the possession of the teacher at all times. However, it will cost the taxpayers money in order to provide the lockboxes, train, provide ammunition and weapons for those teachers making the cut.

Some teacher groups are pleading for armed professional security and they opposed the bill. Be careful what you wish for.

Texas teachers are already permitted to carry guns in class with the permission of their local school boards. However, a small number of districts have actually granted that permission.

Law enforcement officials also warned lawmakers that teachers with guns were at risk of being shot by police responding to emergencies at schools. However, if teachers are armed, more than likely they would be able to remove any threat before police arrived. Thus, that argument is probably not a good one.

I have been no friend of the public education system and have openly stated so. I think children can best be educated at home, not in a state run school. I also think children are best protected in their home where their parents are not restricted by lockboxes and state approval to defend themselves and their families.

What should be taking place is that Texas should take the lead and simply let teachers and school officials carry their weapons at school, not keep them in a lock box where they are doing no one any good.

Senator Brian Birdwell (R) said the concern over law-abiding citizens possessing guns on campus is misdirected: “The Second Amendment is not about the gun, it’s about the right to self-preservation.”

I agree it is, and if it is about the right to self-preservation, why then does one need to get permission from the state in order to defend their lives and the lives of the students they teach? Hmmm? Why does the state get to tell teachers they can have a gun in the classroom, but they must have it in a lockbox within reach? Honestly, that is about as helpful as having a rock on your desk.

Should the teacher be at lunch or out of the classroom, say in an assembly with their class, that gun is doing you absolutely no good. In fact, one could argue that it opens up the potential for the gun to be stolen, lockbox and all. In my opinion this is a bad idea. Again, I simply ask, what is wrong with letting law abiding citizens, who you are already trusting to take care of and indoctrinate your children, simply carry their firearms for protection?

I do think the training is a good thing for anyone who carries a firearm, but I do believe that should be something that the teacher is responsible for, not the taxpayer.Perhaps we should not be surprised at a bill that allows teachers to keep a gun in a lockbox in a state that allows for pro-Muslim, American history revisionism, and anti-Christian CSCOPE curriculum to be taught in their schools.