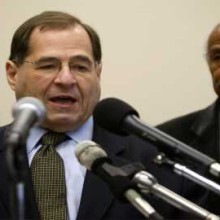 Democrats never cease to amaze me. Socialist Democrat Representative Jerrold Nadler (D-NY) in particular is one that continues to raise eyebrows every time he opens his mouth. In a hearing at the House Judiciary Subcommittee on Thursday, Nadler said that the way to prevent murderers like Kermit Gosnell was to build more Planned Parenthood clinics. The committee met to focus on the Pain Capable Unborn Child Protection Act or H.R. 1797.

“I would urge my colleagues to think about the extent to which he, Dr. Gosnell, represented the poor quality of health care services available in poorer communities,” Nadler, who has a 100 percent voting record with NARAL Pro-Choice America, said.

“We should be working to make sure that high quality health care is provided to the uninsured to make sure the full range of health care services, including family planning services that are available to people with money are available to the poor and uninsured as well,” Nadler added. “If that means funding a Planned Parenthood clinic in every neighborhood to put guys like Gosnell out of business, so be it.”

He also went on to say the hearing was a “farce” and “just another battle of the Republican war on women.”

Well why don’t we just turn that around on him? After all, aren’t the Democrats and Planned Parenthood waging a war on children? I’d say they are waging a war on women too by seeking to deny them the proper means to defend themselves (ie. guns).

The bill’s author and Subcommittee Chairman Rep. Trent Franks (R-Ariz.) opened the hearing with a much different take on the Gosnell matter.

“If Dr. Gosnell had killed the children he now stands convicted of murdering only five minutes earlier, and before they had passed through the birth canal, it would have all been perfectly legal in many of the United States of America,” Franks said. “More than 325 late-term unborn babies are torturously killed without anesthesia every day in the land of the free and the home of the brave.”

“If there is one thing that we must not miss about this unspeakably evil episode, it is that Kermit Gosnell is not an anomaly in this gruesome Fortune 500 enterprise of killing unborn children,” Franks said. “Rather, Kermit Gosnell is actually the true face of abortion on demand in America.”

Sarah Palin blasted Planned Parenthood on her Facebook page, tying them to Gosnell, writing “Considering the role Planned Parenthood has played in looking the other way while the mass murdering abortion doctor Gosnell butchered babies born alive from his horrific infanticide procedures and abused his women patients, it’s perhaps not surprising that this same president sees nothing wrong with allowing his name to be so openly associated with this organization.”

The Susan B. Anthony List also claimed that Planned Parenthood should be held accountable for failing to report he conditions at Gosnell’s clinic. “Planned Parenthood last week admitted to knowing about the conditions inside Kermit Gosnell’s Philadelphia clinic yet chose not to act to help end the killing of newborn babies and butchering of women,” Susan B. Anthony List president Marjorie Dannenfelser said in a statement. “It seems that nothing – not even eyewitness accounts of Gosnell-style conditions in their own clinics – is enough to make President Obama reconsider his unyielding support for Planned Parenthood, which in a single year performed more than 333,000 abortions and received half a billion dollars in taxpayer money.”

The Philadelphia Inquirer reported that Gosnell’s former patients would sometimes go to Planned Parenthood after visiting the Women’s Medical Society, and “would complain to staff about the conditions there.” There is no record that Planned Parenthood turned their fellow abortionist in to the authorities.

However, more telling was Planned Parenthood lobbyist Alisa LaPolt Snow’s defense of infanticide by Planned Parenthood. Back in March, Snow dodged what should have been fairly straight forward answers to questions about what should be done to a baby born alive in an abortion clinic from Florida lawmakers. By not answering directly, she was giving consent to let the child die. Her vacillating got to such a point that one representative finally had to ask her, “What objection could you possibly have to obligate a doctor to transport a child born alive to a hospital where it seems to me they would be most likely to be able to survive?”

Instead of answering that she didn’t have an objection, she merely attempted to make an excuse about how far it was from the nearest hospital. With that kind of reasoning, one should be able to also state that since things can and do go wrong in abortions, they should not be allowed to perform them, since they are knowingly putting the mother at risk by being so far away from a hospital.

Nadler is quite simply a moron. It is organizations like Planned Parenthood that have allowed and even encouraged mass murderers (yes that is what abortionists are) to thrive get rich from blood money provided by Planned Parenthood and the mothers who seek to rob their children of life, all because they look no further than their own selfish desires of choice rather than the natural responsibility of a parent to protect their children. His statement about Planned Parenthood is so far from reality, that we should seriously question his mental capability for serving as a representative of the people.