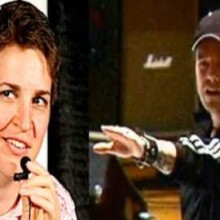 While the scandal with the Internal Revenue Service (IRS) targeting conservative and Tea Party groups continues in the news, there is a connected scandal as well and this one involves the media attacking a conservative Christian ministry. Back in 2010 and 2011, MSNBC’s liberal talk show host Rachel Maddow decided she would weigh in on Bradlee Dean’s comments on homosexuality. The problem with Maddow’s comments that she made is that she accused Dean of calling for the execution of homosexuals, which he never did.

Because of that Dean filed a libel lawsuit against her. It was dismissed after Dean refused to pay $24,000 in court costs to Maddow’s attorneys, which she ordered, but the ministry is looking to take it to DC next month.

Bradlee is not only a contributor for Freedom Outpost and The D.C. Clothesline, but he is also the founder of You Can Run International (YCR), a ministry which not only takes to nationally syndicated radio six days a week, but also reaches out to the young people of America bringing them the history of America, the Constitution and pushing forth the law of God and the gospel of Jesus Christ. If you watch the video above, you will see that Dean made no calls for the execution of homosexuals, but merely pointed out that Muslims were looking to do so.

“I did not respond to MSNBC and Rachel Maddow’s assaults on my ministry without expecting opposition,” Dean said. “When you have MSNBC’s attorneys lobbying these judges, it is self-explanatory. I will leave it to the people to see the transparency of corruption on the behalf of this supposed judicial system. If the judicial system was doing its job, there would be no MSNBCs or Rachel Maddows. The judge knows all the well what MSNBC does on a daily basis. With a communist slogan like ‘lean forward,’ everyone should know that I am dealing with the very people that are trying to destroy our Republic.”

According to Dean, “I took it on the chin at first. But when I got death threats against my family, I knew I had to take action. So I filed a defamation lawsuit against her and MSNBC.”

The Superior Court Judge, Joan Zeldon, who threw out the case, ordered the plaintiffs in the case to pay $24,000 in legal fees for the defendant’s attorneys without any discover or hearing on exactly what those fees were for, according to Dean’s attorney Larry Klayman.

“We’re confident that the judge should have recused herself from the case, due to her bias and prejudice,” said Klayman. “The attorneys’ fees were unwarranted, and in any case inflated, and we are confident of our success on this appeal.”

“Rachel Maddow should not take any satisfaction,” Klayman said. “This is just round one. The case has not been adjudicated on its merits.”

He explained that “clearly, what they did was defamatory, and it put the life of Bradlee Dean and the lives of his family and colleagues in danger.”

Clearly the judge in the case has a bias against Dean and his ministry. As a result, an affidavit was filed with the Superior Court of the District of Columbia concerning the actions and statements of Judge Joan Zeldon, which read in part, “Recusal is required when judicial remarks create the appearance that the court’s impartiality may be called into question, and ‘could suggest, to an outside observer, such a ‘high degree of favoritism or antagonism’ to defendants’ position that ‘fair judgment is impossible.”

He added, “We have learned that Maddow’s lawyers are part of a large and powerful District of Columbia and New York-based law firm which donates to, or supports judges in many ways.”

WND reported on the case back in November:

The move to another court was a “tactical, strategic decision,” the ministry statement said.

“However, Judge Zeldon, who it became apparent had hoped to rule against Dean and YCR and in favor of Maddow and MSNBC given her leftist ideology, sought to punish plaintiffs and throw a monkey wrench into the voluntary dismissal of the case before her. Judge Zeldon ruled that the case before her could not be dismissed unless Dean and YCR paid over $24,000 in attorneys’ fees and costs to Maddow … claiming that the defendants attorneys should be compensated for the legal work they did in her case.”

When Dean challenged the payments, the judge said he was not even allowed to ask questions about the billings. Klayman said a hearing on such fees is routine, but the judge refused even that.

On top of this, the judge had the audacity to refer to Maddow’s attorneys as “distinguished,” while denigrating Dean, YCR and Mr. Klayman.

Dean, YCR and Klayman are now set to bring their case to Washington, D.C. next month. Dean says that his lawsuit is not about just defending his work as a preacher, musician and speaker to youth assemblies, but says, “I’m defending every conservative leader in America who boldly stands up for God’s country and the Constitution. Everyone who publicly stands for our Constitution, which our Founding Fathers and brave soldiers have fought, bled and died for. Whether it is from the pulpit, on the street, or in schools.”

While the Left is using a two-pronged approach, the IRS on one side harassing conservatives and Tea Party groups, and the liberal media attacking on the other. Should this case go down in defeat, it will be like blood in the water for the liberal media. We cannot let this happen.

Dean and his ministry have fought for well over a decade to get their message out to young and old alike. They need our support. It has already cost the ministry thousands of dollars in court fees to defend Constitutional principles, which the outcome will have long term effects upon us and our children.

If you would like to support the fight against the liberal media, you can do so by clicking here and contributing to the cause.