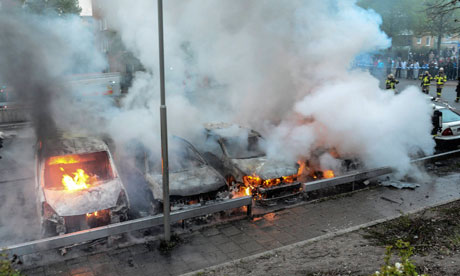 If you have ever seen more blatant evidence of a liberal-leftist-agenda in the mainstream media please let me know. We have all by now heard of the riots in Swedish “immigrant” suburbs that are now a week old. We have heard that these riots were caused by the slaying of a 69 year old man and continue because of general unrest with unemployment rates in the area. These unruly “youths” are burning cars and breaking out windows. They are burning buildings and throwing stones and molotov cocktails at police and emergency personnel. If you are to watch or read mainstream liberal media there is one word that they seem to frequently omit from the story…

The political correctness that we see dominant in our own country is exactly how Sweden got into this mess. Their open door immigration system and generous welfare model has attracted immigrants from all over but the neighborhoods where these riots are happening are predominantly MUSLIM neighborhoods. So here is some truth. I am going to post a video and a short write up from Swedish News Reports so you can read and see what you are missing in our media.

Swedish News Reports placed this story with the video:

Rioting muslim refugees in Husby Stockholm Sweden. About 200 muslim – socialists have planned the riots for days. The main group behind the riots, Megafonen, got City funding as “youth activist group”. Turns out that the “youth” consists of revolutionary muslim activists with a plan to destroy the areas they live in.

The government is lying about crime rates and unemployment for immigrants.

Next they demand money, free housing and welfare money for their clans, vacation pay and cars. Next they begin to demand money and offices for their groups and community organizations.

In this case, one of the groups, Megafon organized the riots, and the leader stirred up violence against the police before she shut down her Twitter account to hide her tracks. A screen shot was saved and can be seen in the film.

Rioting in the 200 burning hell hole cities called ghettos are common in Sweden. Large masses of rioting groups roam in packs, set fires to trick police and fire to arrive, them they pelt the emergency vehicles with rocks, IED’s, fireworks or use guns. .

FRIDAY May 24 AM UPDATE
The jihad riots continued a 5th day. So far about 20 schools have burned, 3 police stations overrun and destroyed, over 300 cars burned, thousands of storefront windows broken, many public buildings burned, hundreds of businesses destroyed and shut down, several apartment building attacked with firebombs, they were full of occupants, some were handicapped and have no way to escape, no death so far.

The media response so far is to blame the police, support the rioters with sympathetic news reports, inviting terrorists in the TV studios for debates etc.

Unless you are getting your news from an alternative source you are not getting any of this information. Is it any wonder that things get worse every day here?

I don’t care about political correctness. If the riots are linked to Muslims then say it. It seems like the whole world is being duped and it’s time for this nonsense to stop.

America deserves the truth because our future depends on it.