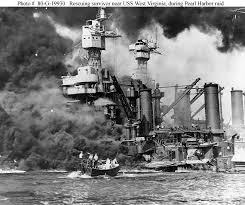 There were five Sullivan brothers: Depression-era, Catholic Irish-American sons of Tom and Alleta Sullivan of Davenport, Iowa. George, Francis, Joseph, Madison, and Albert Sullivan discovered that when Pearl Harbor was attacked on December 7, 1941, one of their friends was aboard the USS Arizona. In their desire to avenge a friend’s death, they did what so many other Americans did in the aftermath of that devastating attack. They enlisted in the armed forces.

They chose the U.S. Navy and insisted that they be assigned to the same ship. The Navy had a policy against such assignments, but it was loosely enforced. By August, 1942 the brothers were aboard the light cruiser USS Juneau and participating in the Guadalcanal Campaign. On November 13, 1942, their ship was hit by a torpedo and withdrew from the naval engagement. The Juneau was later hit by another torpedo which detonated near the ammunition magazine. The ship exploded and quickly sank.

Letters from the Sullivan brothers suddenly stopped arriving at their Davenport home and the parents grew worried. Letters were the lifeblood that connected anxious American families with their sons in harm’s way.

On January 12, 1943, as father Tom prepared to leave for work, three naval officers arrived at the front door. Tom knew immediately that the news would not be good.

In addition to the parents and sister Genevieve, the survivors included Albert’s wife and young son.

The loss of a single service member is a devastating event for a family. We’ve seen it repeated across the nation for the past ten years with wars in Afghanistan and Iraq. Many of us can still remember the losses from Vietnam. It’s always heartbreaking, always painful and gripping.

Can you imagine the shock and inconsolable despair the Sullivan family felt on that day in 1943?

No, of course not. Only the Sullivan family knew the pain, the numbness, and the utter disbelief in losing all five of the brothers. The blue-star flag in the window, indicating sons serving in the military, would now have five gold stars. FDR would send a condolence letter and resolutions honoring the family would be passed by state and local governments. Later, a U.S. warship would be named after the Sullivan brothers. But nothing could bring those boys back.

On this Memorial Day weekend, we honor all the gold-star families who have lost sons and daughters in service to our nation. If not for the willingness of our citizens to serve and sometimes sacrifice, American history would have charted a far different course. That willingness is still on display, from the distant battlefields to the blue-star flags in the windows. Thank God for those magnificent Americans in uniform, and those equally magnificent families supporting them.

In the 1944 movie The Fighting Sullivans, Tom watches with pride as Alleta christens the new destroyer, the USS The Sullivans. As the ship sails away to take its place in the still ongoing war, Alleta turns and says, “Tom, our boys are afloat again.”

Gerald Gillis is a writer and speaker living in Atlanta. He is the author of the business thriller “Dare Not Blink.” He also authored the award-winning historical novel “Shall Never See So Much.” Gerald is available for event speaking and booksigning appearances. Contact him at his website http://www.geraldgillis.com.