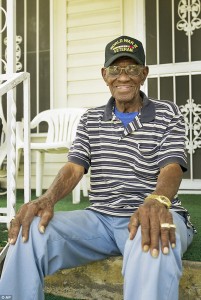 Richard Arvine Overton is believed to be America’s oldest living veteran and he’ll be celebrating his 107th Memorial Day quietly today at his Texas home he built after he returned from World War II.

Overton watched as many of his fellow soldiers gave their last full measure of devotion in World War II and over the decades he has seen even more give their lives in the service of their country.

Mr. Overton plans on spending the day on the front porch of his East Austin home with a cigar in his right hand and a cup of whiskey-stiffened coffee nearby. Overton sounds like my kind of guy.

Richard Arvine Overton, 107, on his front porch in Austin, TX

“I don’t know, some people might do something for me, but I’ll be glad just to sit down and rest,” the Army veteran said during a phone interview. “I’m no young man no more.”

Overton, who was born on May, 11, 1906, in Texas’ Bastrop County, has gotten used to being the center of attention of late. In addition to being formally recognized by Austin Mayor Lee Leffingwell on May 9, Overton traveled to Washington, D.C., on May 17 as part of Honor Flight, a nonprofit group that transports veterans free of charge to memorials dedicated to their service. Despite serving in the South Pacific from 1942 through 1945, including stops in Hawaii, Guam, Palau and Iwo Jima to name a few, it was Overton’s first time in the nation’s capital.

“I was really honored when I got there,” Overton said of his visit to the World War II Memorial. “There were so many people, it was up in the thousands. And we danced and we jumped … them people tickled me to death. It made me happy as can be.”

Overton says at his age that he is able to stand up and do anything. His mind is also sharp and he is able to do whatever he wants to do. He says he is in good health and doesn’t take any prescription medicines. Like my veteran father, he stays busy in his yard, trimming trees, helping with horses and cleaning driveways. He likes to keep moving and doesn’t watch television.

He credits his long life to a daily dose of aspirin and a relatively stress-free life he has enjoyed since leaving the service in October 1945.

He attends his church every Sunday, was married twice, but never fathered any children.

According to Overton, he passes the day smoking up to 12 cigars a day and a little whiskey in his morning coffee. “I may drink a little in the evening too with some soda water, but that’s it,” he said. “Whiskey’s a good medicine. It keeps your muscles tender.”

The city of Austin recognized Overton as the oldest veteran in Texas during his birthday proclamation at City Hall. Mayor Leffingwell Austin is “honored” to call Overton one of their own and an unsung hero.

While Overton believes he is the oldest living veteran, he doesn’t feel it. In fact, he feels decades younger. His desire this Memorial Day would be to spend a few hours reliving old war stories with fellow veterans.

“I know I had someone from my platoon until recently, but he passed so now I don’t have anyone that I know,” he said. “So I feel lonesome by myself sometimes. I would love to ask some of them some questions, but nobody is here. Everybody’s passed.”

For Mr. Overton and those who have served before, alongside and after him, a grateful nation thanks God for you and your service.