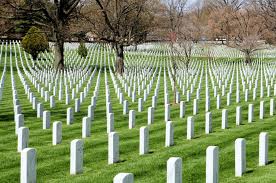 More than 285,000 people have been buried at Arlington National Cemetery. Headstones of veterans from the Revolutionary War to the current struggle in Afghanistan adorn Arlington’s rolling Virginia hills. Soldiers of every age, sex, race, and creed are buried there. Many were killed in action, some dying in places named Bull Run, Belleau Wood, Iwo Jima, Hungnam, Quang Tri, Fallujah, and Kandahar.

There are generals and admirals and decorated heroes at Arlington, along with astronauts, Supreme Court justices, and two U.S. presidents. The Tomb of the Unknowns is guarded around the clock and holds the remains of one unknown each from World War I, World War II, and the Korean War.

Suppose for a moment we could hear from a group of twenty-year-old soldiers who died on the battlefields of each of our wars since the Revolution. Also suppose they never achieved high rank, never became fathers or grandfathers, and never tasted their mother’s cooking again. They were never again buoyed when their misty-eyed fathers extended a hand while saying, “I’m proud of you, son,” or saw the look of admiration on the faces of their younger siblings. They were just scared, homesick, acne-faced young men who confronted the enemy, fought bravely, and met violent death in the flower of their youth.

So what would they tell us about what they understood they died for? What would they think of the America we now have, as opposed to the one they knew and loved? What advice would they give us about how we should live our lives, or treat others, or act as citizens of a free and great nation?

What would they tell us?

If we told them about how some of us felt our individual liberties seem to be eroding more and more, would the young solider of the Revolution roll his eyes and giggle at the seeming abundance of liberty we now enjoy? If we complained about the deep-rooted unethical and corrupt behavior of so many of our public officials nowadays, would the Civil War solider shrug his shoulders as if to say, “What else is new?” If we expressed our concern over our nation’s seeming incoherent foreign policy, would the Vietnam soldier consider the issue for a brief moment before erupting in loud laughter? But what about Benghazi? The American people don’t seem to care about this, we explain to the Korean War soldier. “Yeah? So get over it,” he might say.

But if we asked our young warriors if they would do it all over again, knowing their outcomes would still be the same, what do you think they would say? I don’t know about you, but my strong sense is they would all say, “Yes! My America was worth dying for.”

Is our America still worth dying for?

Well, ask a twenty-year-old soldier on active duty. He comes from the same stuff as did those twenty-year-olds who preceded him, and it’s good stuff indeed- firm, unselfish, enduring stuff. Ask the young soldier if the multiple deployments are worth it; if seeing a buddy’s limbs blown in different directions by an IED is part of the price; if America, despite its divisiveness and imperfections, is still worth an admission to Arlington.

Again, my strong sense is they would say, “Yes!” They still believe in the greatness and goodness and resiliency of America. They still want to make a difference. They honor their brothers-in-arms from Arlington by their service and their sacrifice, and in the process, they honor us. All of us. Red state, blue state, every state.

May God bless them for it.

And those who went before them.

Gerald Gillis is a writer and speaker living in Atlanta. He is the author of the business thriller “Dare Not Blink.” He also authored the award-winning historical novel “Shall Never See So Much.” Gerald is available for event speaking and booksigning appearances. Contact him at his website http://www.geraldgillis.com.