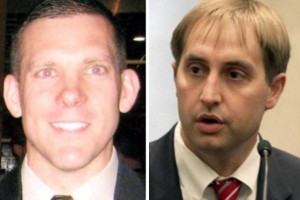 Do you believe in coincidences? Many of them? A lot of them?

There are more “coincidental” deaths associated with Pres. Lucifer. See Steve’s post of May 10, 2013, “Today I bring you Skippy’s version of the St. Valentine’s Day Massacre.”

Scott Daugherty reports for PilotOnline.com that the FBI announced in a statement that two members of the FBI’s elite counterterrorism Hostage Rescue Team, Special Agents Christopher Lorek and Stephen Shaw, died on May 17, 2013, while practicing how to quickly drop from a helicopter to a ship using a rope.

The incident happened about 12 nautical miles off the coast of Virginia Beach. A law enforcement official blamed bad weather for the incident and said the agents fell into the water and probably died from the impact, instead of from drowning.

Danny Coulson, a former deputy assistant director of the FBI who started the Hostage Rescue Team (HRT) 30 years ago and served as its first commander, said the HRT members “have the same skill sets as SEAL Team 6 and Delta Force.” They are trained to rappel from helicopters, scuba dive and use explosives to break down doors and walls. When needed, the team can deploy within four hours to anywhere in the U.S. “Whenever things go really wrong, the FBI calls in the Hostage Rescue Team. It’s the government’s 911,” Coulson said.

Last month, the Hostage Rescue Team was involved in the arrest of Dzhokhar Tsarnaev, a suspect in the Boston Marathon bombings.

Glenn McBride, a spokesman for the state medical examiner’s office, said it could be months before his staff can release a final cause and manner of death for the two elite FBI agents.

There is another mysterious Boston Marathon bombing-related death.

On April 23, 2013, Sunil Tripathi, initially identified as a Boston bombing suspect, was found dead in the Providence River. Tripathi, a former Brown University students, had been missing since mid-March.