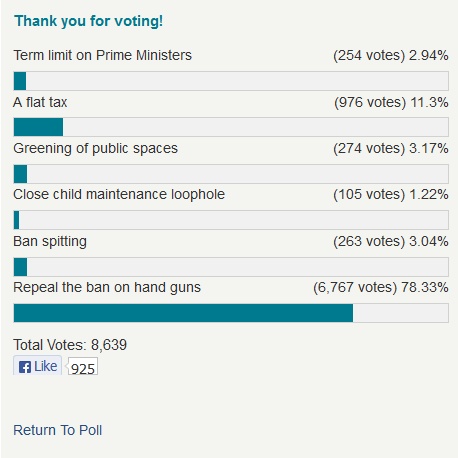 In an interactive poll published by The Telegraph late last week it is clear that a large number of British citizens want their handguns back. The readers of The Telegraph were asked to prioritize six new pieces of legislation that they would like to see debated in The House of Commons:

A ten-year term limit for Prime Ministers, suggested by Alun Morris. He writes: “The two term limit of the US Presidency has saved them from much corruption, abuse of power and personality cults.”

A flat tax, proposed by Taxfair. They write: “Set income tax at the same percentage for everyone regardless of how much they earn. Higher earners pay more tax on the things they purchase, generally use less services provided by the state, give more to charity and invariably have a business to run which generates jobs and further tax for the state.”

A law to encourage the ‘greening’ of public spaces, proposed by Mattstrat. They write: “Councils and Local Authorities should be set a 25% inner-city and a 40% suburban target of grass verges for footpaths along with vegetation planting in public areas such as roundabouts. Work undertaken for the greening of towns and city would be done by people receiving an unemployment benefit.”

Abolish the loophole that leaves student parents exempt from paying child maintenance, proposed by Rebecca Lynall. She writes: “This situation is entirely unfair. If maintenance cannot be paid, a debt should be accrued for these children’s futures and not simply written off as though they do not exist.

A ban on spitting in public, proposed by LestWeForget. They write: “It is not only anti-social and disgusting, it is a health hazard. Tuberculosis, which had been virtually eradicated, is now on the rise. This habit is unacceptable and should be outlawed in a civilised society.”

Repeal the ban on hand guns and re-open shooting clubs,proposed by Colliemum. They write: “After all, why should only criminals be ‘allowed’ to possess guns and shoot unarmed, defenceless citizens and police officers?”

The graphic above is not a final tally. If you would like to see the way the vote is shaping up you can click here.

The Daily Mail reported in 2009 that gun violence was up 89% over a ten year span since the hand gun ban was passed and implemented.

Tell me again why our government wants to take our guns? Do not be fooled, it has nothing to do with crime. They know what has happened in Britain. They also know that half of our population is too stupid to know better.

Gun control is not about guns…it’s about control.