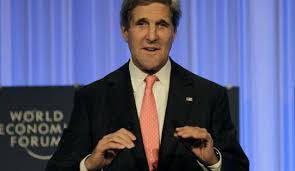 John Kerry has been busy. Speaking at the 2013 World Economic Forum on the Middle East and North Africa held in Jordan, Secretary of State Kerry unveiled a plan to boost the Palestinian economy. The plan involves $4 BILLION in new funding and would seem to carry the endorsement of many foreign leaders.

The idea is that this brilliant plan will buy peace in the Middle East, or at least part of it. Here is an excerpt from Secretary of State John Kerry’s address at the latest World Economic Forum on Sunday:

“Their plan begins with encouraging local, regional and international business leaders to, and to encourage government leaders in various parts of the world. I raised this issue with the President of China, with the Prime Minister of Japan, with all of our European leaders, and everywhere – with the Brazilian Foreign Minister a few days ago, with the New Zealand Foreign Minister. All of them have on the tip of their tongues the idea that we can make peace in the Middle East and need to, and all of them are committed to be part of this effort in order to change life on the ground.

The fact is that we are looking to mobilize some $4 billion of investment. And this team of experts – private citizens, donating their time – are here right now. They’re analyzing the opportunities in tourism, construction, light manufacturing, building materials, energy, agriculture, and information and communications technology.

The preliminary results already reported to me by Prime Minister Blair and by the folks working with him are stunning: These experts believe that we can increase the Palestinian GDP by as much as 50 percent over three years. Their most optimistic estimates foresee enough new jobs to cut unemployment by nearly two-thirds – to 8 percent, down from 21 percent today – and to increase the median annual wage along with it, by as much as 40 percent.”

Please notice the section I added emphasis to (bold print). Basically we are going to give Palestinians 4 billion dollars and make some recommendations but they will ultimately decide how to spend the money. Sound familiar?

Americans need to wake up and see what is going on. It is unclear where this money is coming from but we are about to pump 4 billion dollars into a region that is hell bent on the complete annihilation of Israel, which is one of our oldest and most trusted allies. I hesitate to call Palestine a state because I don’t believe everything I see on Google. I didn’t add that to be funny. Do not underestimate the role of Big Business and its ties to Big Brother.

Let’s not forget tanks, fighter jets and $250 million that we have already sent to Morsi’s Egypt which is well known for its persecution of Coptic Christians. Morsi says one thing and allows another thing to happen.

John McCain just visited with Syrian Rebel Leaders who are known to be tied to Al Qaeda.

The Benghazi cover up has taken a huge turn with two new whistleblowers coming forward to acknowledge that Ambassador Stevens was in Libya to buy back Stinger Missiles from Al Qaeda and it has already been acknowledged that we were paying an Al Qaeda linked organization to defend our diplomatic mission in Benghazi.

How much evidence do we need before we can admit that our government is in bed with terrorists?