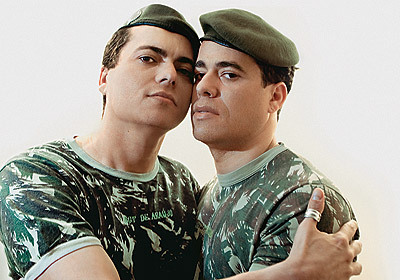 You’ve seen or heard the news about the rising incidence of sexual assaults in the U.S. military. Our automatic assumption is that most were women.

Welcome to the Obama military!

Scarborough reports for The Washington Times, May 20, 2013, that a recent Pentagon survey shows more military men than women are sexually abused in the ranks each year, but those man-on-man sexual assaults are underreported.

The Pentagon’s 1,400-page annual report came with two basic sets of data: official reports of sex crimes and a scientific survey sample of the 1.4 million active force from which the department extrapolated the number of abuses, regardless of whether they were officially reported

In fiscal year 2012, which ended on September 30, 26,000 service members were victims of sexual assaults, But roughly 14,000 of the victims were male and 12,000 female, according to a scientific survey sample produced by the Pentagon.

Data showed 2,949 reports of abuse against a service member last yearcompared with 1,275 in 2004. The vast majority of reported victims (88%) were female — a statistic that tells the Pentagon that male victims (12%) do not come forward at the same rate.

Elaine Donnelly, who heads the Center for Military Readiness, says: “It appears that the DOD has serious problems with male-on-male sexual assaults that men are not reporting and the Pentagon doesn’t want to talk about.”

Donnelly pointed out the number of formal reports of sexual assault jumped from 1,275 to 2,949 in just eight years. She told WND when factoring in civilians working for or around the military, the increase in that time is 98%.

Women are identified as the attacker in just 2% of all assaults, meaning most men who suffer assault are targeted by other men. “So we’ve got a male-on-male problem here. The Department of Defense doesn’t want to comment on this. They know that the numbers are there. They say that they care, but all the attention is usually given to the female members of the military who are subjected to sexual assault,” Donnelly said.

Donnelly had fought Obama’s decision to lift the ban on open gays in the ranks, which took effect in September 2011. She also opposes plans to open direct ground combat jobs to women, saying it will import the sexual abuse problem into the combat ranks.

Pentagon spokeswoman Cynthia Smith said the Sexual Assault Response and Prevention Office is tackling the entire problem and “recognizes the challenges male survivors face and has reached out to organizations supporting male survivors for assistance and information to help inform our way ahead. A focus of our prevention efforts over the next several months is specifically geared toward male survivors and will include why male survivors report at much lower rates than female survivors, and determining the unique support and assistance male survivors need.” She said the department has included information on male victims on the “DOD Safe Helpline,” which connects them to trained professionals.

Aaron Belkin, who heads the homosexual activist group, The Palm Center, which studies gays and lesbians in the military, said “very few” male-on-male perpetrators are gay and that such incidents are “somewhat similar to prison rape.”

In 2012, Donnelly told WND that the statistics showed a more than 20% increase in reported sexual assaults on males.