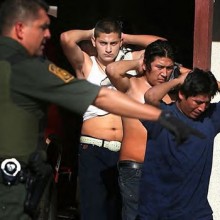 According to the Government Accountability Office (GAO), there are at least 266 immigrants who have overstayed their visas, now making them illegal and posing a serious national security threat. Not surprisingly, the Department of Homeland Security (DHS) is unable to locate these potentially dangerous illegals.

In testimony on May 21 before the Subcommittee on Border and Maritime Security and Committee on Homeland Security in the United States House of Representatives, Rebecca Gambler, Director of Homeland Security and Justice for GOA, said that DHS had identified at least 1,901 illegals who have overstayed their visas. Fourteen percent remain missing as of March 2013.

The report said that 481 of the cases were dealt with by Immigration and Customs Enforcement’s (ICE) Enforcement and Removal Operations (ERO) division. According to the report this was due to the fact that these cases presented “potential public safety threats.” ERO is “responsible for identifying and apprehending aliens who are subject to removal from the country, detaining these individuals when necessary, and removing aliens subject to removal from the United States.”

While ERO was handling 25.3 percent of the cases, another 15.9 percent, or 302, of those illegal overstays were changing their status to continue living in the U.S. Still another 711 (37.4 percent) had already left the country.

DHS is having a hard time keeping up with real homeland security it seems. All of these findings are a result of a review of a backlog in the summer of 2011 of 1.6 million overstays!

According to the report, 863,000 cases were removed because either the individual had left the country or had obtained a legal status.

How did they determine this? According to the report:

As of April 2013, DHS continues to maintain more than 1 million unmatched arrival records in ADIS. GAO’s preliminary analysis identified nonimmigrants traveling to the United States on a tourist visa constitute 44 percent of unmatched arrival records, while tourists admitted under a visa waiver constitute 43 percent. The remaining records include various types of other nonimmigrants, such as those traveling on temporary worker visas.

Two United States Senators, Homeland Security and Governmental Affairs Committee Chairman Joe Lieberman (ID_CT) and Ranking Member Susan Collins (R-ME) cited the report by the GOA and “revealed 40-45 percent of the estimated total population of illegal aliens — 4 to 5 million people – stayed past their visa expiration dates. But DHS’ U.S. VISIT program – which is supposed to identify people who overstay their visas by comparing entry and exit information – cannot keep up with the number of potential overstays it identifies by matching entry and exit records.”

“Despite numerous congressional and DHS efforts, we still lack an exit system that will effectively identify people who have overstayed their visas, and do so in real time,” Senator Lieberman said.  “The reality is that U.S. VISIT remains a very troubled and ineffective program.”

Jim Kouri points out that “US-VISIT processes less than half of the potential overstays it identifies, and GAO found that the program has a backlog of 1.6 million potential overstay records.  Once a potential overstay has been identified, the information is provided to Immigration and Customs Enforcement (ICE), which devotes just 3 percent of its investigative man-hours to tracking down immigrants whose visas have expired.”

Elizabeth Harrington cites other examples, including “Hosam Smadi, a Jordanian national, who overstayed his visa and plotted to blow up a Dallas skyscraper in 2009, and Amine El Khalifi, a Moroccan who was living past his visa since 1999 and was arrested for plotting to bomb the U.S. Capitol last year.”

While Homeland Security Secretary Janet Napolitano boasts the success of her department in dealing with illegals and border security, reports like this one present us with another picture of what is actually taking place.

Senator Collins said, “According to the GAO report, ICE should do a better job identifying the estimated four million people in the United States who have stayed illegally after their permission to be here expired.”

“The Pew Hispanic Center reports there are about 12 million individuals here illegally and between four million and 5.5 million of those came here legally but their visas have since expired.  I understand that only three percent of ICE efforts are focused on these cases.  That seems insufficient and shortsighted as almost half of all unauthorized residents fall into this category,” the senator added.

Additionally, DHS is required to report to Congress on visa overstays. Guess how that is going. It’s not. They have been an abject failure. DHS claims it is due to their lack of “confidence in the quality of its overstay data,” but Napolitano claims that they will report on overstays by the end of 2013.

Well isn’t that nice? What is the department doing in the meantime while potentially dangerous illegals are running free in our country? I guess we’ll just have to wait and see as this should begin to rear its head, not necessarily as a scandal, but about the incompetence of the people in positions of authority not doing their jobs and not following the law. I call for Janet Napolitano to be removed from her post, along with all other incompetents in the Obama administration who are not performing as they should be.