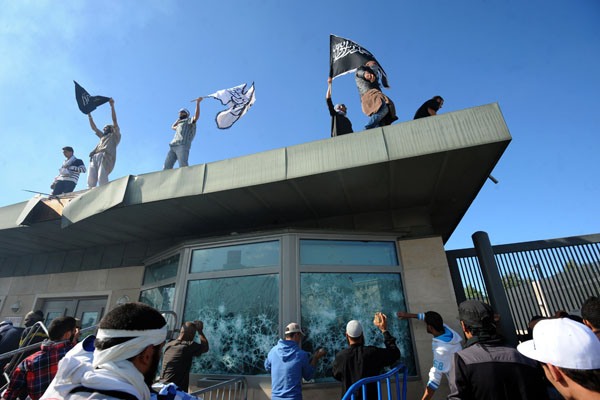 With the story of the Benghazi attack many people forget the other protests and attacks of September 2012. On September 14th Tunisians who were supposedly protesting the now infamous YouTube video attacked the American Embassy, set fire to it, burnt an American school and looted both the school and the American Embassy. In the wake of this particular attack 2 people were left dead and 29 injured.

We hear so much in this country about how tough Islamic justice can be. If we are to believe what we read then we would think that such an attack would warrant a stiff punishment, especially in light of the fact that the Tunisian government officially renounced the attack.

As reported by The Australian:

TWENTY people have received a two-year suspended prison sentence for their part in a deadly attack on the US embassy in Tunisia last year, their lawyer said.

“They all got a two-year suspended sentence,” said lawyer Anouar Ouled Ali.

The verdict, which was not made public, came after only half a day, an unusually short trial in the north African country.

Hundreds of angry Islamist protesters attacked the US mission in Tunis on September 14 after an American-made film mocking their religion was published on the Internet.

Four of the assailants were killed and dozens wounded in the violence, which saw protesters storm the embassy and torch a neighbouring American school.

Questioned individually by the judge, the accused denied having taken part in the protest or attacking the embassy and the police.

Tunisian judicial rulings are not usually announced in court.

Defence lawyers strongly criticised the trial and the main charges, including premeditated attacks organised by an armed gang, with sentences ranging from five years in jail to possible death penalties.

No executions have been carried out in Tunisia since 1991 and death sentences are rarely pronounced.

“These protests were part of a spontaneous reaction throughout the (Muslim) world against attacks on our sacred symbols,” said one of the defence lawyers, Slah Barakati.

We have heard that “spontaneous reaction” line before. I’m going to say what I feel and not sugar coat it. People can get that on CNN and MSNBC if they would like.

Have you ever heard that old saying that “men don’t need a reason for sex, they just need a place?”

I feel the same way about radical Muslims. They don’t need a reason. They just need a place. As soon as some obscure YouTube video comes out they all go rushing to do what they were eventually going to do anyway.

A government that renounces such an action is quick to let the perpetrators go with a warning. The truth is that it’s all about politics and always will be.

Of course Tunisia renounced the attack. They had to. Why?

Reuters reported shortly after the incident:

Tunisian President Moncef Marzouki condemned what he called “an attack against the embassy of a friendly nation”.

Tunisia expects Washington to guarantee around a fifth of the $2.2-2.5 billion its needs to borrow next year to help its economy recover after its revolution last year overthew its veteran leader and triggered the Arab Spring uprisings.

We are talking $400-$500 million there. That is what qualifies us as a friendly nation. Of course us giving money to those who hate us and hate our allies is nothing new. Over the weekend Secretary of State John Kerry was busy putting together a $4 Billion package for Palestinians.