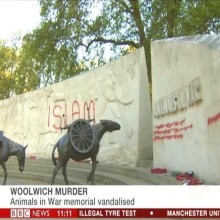 While we were remembering our fallen veterans Monday, Islamists vandalized the Royal Air Force Bomber Command Memorial and the Animals in War Memorial, which are both in central London. The vandals used red spray paint to desecrate the memorials and paint the word “Islam” on them. However, since no arrests have been made, Metropolitan police claim that the motivation behind the damage is unclear. Really? Are the authorities in Britain so stupid as to not know the motivations after the daylight attack and mutilation of one of their soldiers by an Islamist last week? I seriously question whether Britain’s authorities have a chance at surviving the rise of Islam there.

To help cover up the fact that the motivation is Islam, the words were covered up with plastic tarps.

A spokesman for the Scotland Yard said: “At 5am this morning police discovered graffiti on both the RAF Bomber Command War Memorial in Green Park and the Animals in War Memorial on Park Lane.

“Royal Parks’ officers and Westminster police are investigating. There have been no arrests at present.”

The incidents are being treated as criminal damage, police added.

The news emerged as around 1,000 English Defence League (EDL) demonstrators marched through Admiralty Arch and onto Parliament Square.

Wow! That is a serious understatement. According to sources we have in the UK, there were roughly 7,000 protesters, which you can see marching through the streets here.

A number of mosques have also been attacked, and understandably so, in the wake of the murder of UK soldier Lee Rigby.

Guy Benson writes concerning the ongoing investigation into the jihadists that murdered Rigby, “British intelligence is still piecing together clues as to whether the attackers were part of a larger Islamist cell.  Over the weekend, a French solider was stabbed in the neck in Paris.  The assailant was described as wearing a robe and of North African descent.  His motive is as much a “mystery” as the British vandals’ is.  The wounded soldier who survived the attacks “was on patrol as part of a heightened security plan initiated in certain areas following France’s intervention in Mali earlier this year,” according to the French government.  Meanwhile in Sweden, rioting “youths” — predominantly Muslims — set fire to cars and buildings in riots that swept across the Scandinavian nation in recent days.”

Get that? For Britain and France the attacks of Islamic Jihadists are a “mystery” to them. They cannot seem to understand or are willfully ignorant, which is more likely the case, of what the motivation is. We are even seeing the whitewashing of Islamic behavior in Stockholm because government want to cater to Islam rather than expose it.

Here, I’ll provide you with the motivation and warn you that if you do not understand the Islamic motivation and deal with it, they will deal with you. My friend David Wood, brilliantly aids anyone who wants to really understand the motivation of Islamists to murder in the name of Islam. He did so following the Boston bombing and again following the cold blooded murder of Lee Rigby. As I’ve said before, for those who wish to bury their heads in the sand about what Islam really is, perhaps you will understand it only when they are cutting your head off, orperhaps not.

The inability of authorities to understand the obvious motive suggests that London needs a new Sherlock Holmes, because they seem to have a team of Mr. Magoos.