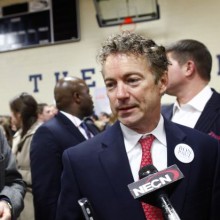 For those that didn’t know, Senator Rand Paul (R-KY) is a medical doctor and one might ask who better to talk about the monstrosity that we refer to as “Obamacare” than a medical doctor. Well Paul did just that as he spoke to the Iowa Republican Party this month. He spoke about 122,000 new medical diagnostic codes doctors will have to use to inform the government about injuries sustained by Americans. These new codes are part of Obamacare that is set to go into effect January 2014.

CNN recently conducted a poll (May 17-18) in which they found that 54 percent of Americans still don’t want Obamacare and only 43 percent support the health care law. I’m guessing that most of them are either those that think government should make you purchase health insurance or they think they will be getting free health care.

“Your government just wants to take care of you,” he said. “They don’t think you’re smart enough to make these decisions.”

While doctors normally have about 18,000 medical diagnostic codes they choose from, the new health mandates will include 140,000!

“The macaw?” Paul asked. “I’ve asked physicians all over the country, ‘Have you ever seen an injury from a macaw?’”

Of course the crowd found it funny as they laughed at the ridiculousness of the new codes and Paul’s statement about discovering two new codes under Obamacare for “injuries sustained from a turtle.”

“Now, you might say, ‘Well, turtles are dangerous,’ but why do you have to have two codes?” Paul asked. “Your doctor has to inform the government whether you’ve been struck by a turtle or bitten by a turtle.”

The Kentucky Senator then ended by pointing out a code for “injuries sustained from burning water skis.”

All of this was to simply point out some of the ridiculous lengths that government goes to in order to put law into place, especially a law they passed that they didn’t know what was in it.

By the way, I’m sure the regulations and codes will continues to grow. After all, we saw the Obama Health and Human Services Department dump 13,000 new regulations following his re-election and 700 pages release at the beginning of March of this year.