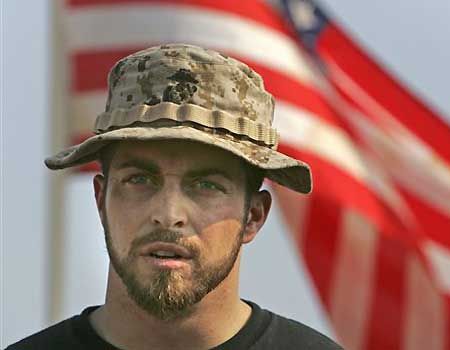 Did that get your attention?

If that happens, what do you think the federal and state governments will do?

They will call in police armed to the teeth, SWAT teams, National Guards, and maybe even the military, Posse Comitatus be damned. (See “US military gives itself authority to police America without permission,” May 20, 2013.)

It would also be the perfect pretext and excuse for Pres. Lucifer to impose martial law.

Given the gravity of what Kokesh is spearheading, shouldn’t we know something about the man?

Who is he? Is he really who he claims to be?

Let’s begin with the caption for this pic of Kokesh (see below) in the Washington Post:

Sept. 4, 2007: Adam Kokesh is seen outside the Capitol after calling for the end of the war in Iraq. In his six years as a professional rabble-rouser, he has embraced positions on every side of the political spectrum. (Jim Young/Reuters)

Back in 2007, five years ago, Kokesh already has a reputation of “embracing positions on every side of the political spectrum”!

This is what Wikipedia says about Kokesh:

Born in 1982, Adam Kokesh is a self-described libertarian, anti-war activist, and, from 2010 to 2011, a talk radio host and doing “a stint on television” with RT (Russia Today). He was a corporal in the United States Marine Corps Reserve, and a non-combat veteran of the Iraq War, serving in Falujah in 2004 in the 3rd Civil Affairs Group as a liaison between the U.S. military and Iraqi civilians.

He is an outspoken opponent of U.S. military intervention in Iraq. Starting in 2007, he became a member and leading proponent of “Iraq Veterans Against the War“. In 2011, he and Nathan Cox co-founded “Veterans for Ron Paul.” Some of his demonstrations protesting U.S. military missions overseas and his acts of civil disobedience have been “controversial.” (Click here for his protest activities 2007-2013).

In 2010, Kokesh ran unsuccessfully in the GOP primary for New Mexico’s 3rd congressional district seat. His campaign donations were mainly from out-of-state, and he received endorsements from Congressman Ron Paul and from the Republican Liberty Caucus.

The son of Charles Kokesh, a Santa Fe businessman and former owner of the defunct Santa Fe Horse Park, Adam Kokesh is Jewish and a self-avowed atheist.

On May 19, 2013, at a marijuana “Smoke Down Prohibition” protest in Philadelphia, Kokesh was dragged away by the police, charged with “resisting arrest” and felony assault of a federal officer, and held without bail.

A week later, he was released from jail. The day before his release, Kokesh had issued a statement from his cell calling for an “American Revolutionary Army” to march on all 50 State capitals:

“When a government has repeatedly and deliberately failed to follow its own laws, violated the fundamental human rights of its citizens, threatened the sanctity of a free press, created institutions intended to eliminate privacy of communication, waged war at the behest of special interest that threatens the public safety, killed hundreds of children with drone strikes, imprisoned and destroyed the lives of countless individuals for victimless crimes, stifled economic opportunity to maintain the dominance of the financial elite, stolen from the people through an absurd system of taxation and inflation, sold future generations into debt slavery, and abused its power to suppress political opposition, it is unfit to exist and it becomes the duty of the people to alter or abolish that government by whatever means necessary to secure liberty and ensure peace.

A new American revolution is long overdue. This revolution has been brewing in the hearts and minds of the people for many years, but this Independence Day, it shall take a new form as the American Revolutionary Army will march on each state capital to demand that the governors of these 50 states immediately initiate the process of an orderly dissolution of the federal government through secession and reclamation of federally held property. Should one whole year from this July 4th pass while the crimes of this government are allowed to continue, we may have passed the point at which non-violent revolution becomes impossible.

The time to sit idly by has passed. To remain neutral is to be complicit, just doing your job is not an excuse, and the line in the sand has been drawn between the people, and the criminals in Washington, D.C. While some timid souls will say that it is too early, that we can solve this problem through democratic means provided by government, that current levels of taxation are reasonable for the services provided, and that the crimes of this government are merely a tolerable nuisance, it may already be too late.

While there is risk in drastic action, the greater danger lies in allowing this government to continue unchallenged. So if you are content with the status quo, stay home, get fat, watch the fireworks from a safe distance, and allow this Independence Day to pass like any other. But if you see as we see, and feel as we feel, we will see you on the front lines of freedom on July 4th, 2013 for this, The Final American Revolution.”

Kokesh’s statement calling for a “Final American Revolution” has echoes of the American Revolution and the Declaration of Independence. He is calling for the 50 states to overthrow (“dissolve”) the federal government, i.e., the Obama regime. So why is it that Kokesh’s Facebook page once had his “Work Info” as:

That “Work Info” is no longer on his Facebook page. Before the page was scrubbed of that info, however, Lady Patriots blogger Dr. Sharon Schuetz had taken a screenshot of Kokesh’s Facebook page (click image to enlarge):

Then there is the matter of the FreeAdamKokesh website being created 6 days before his arrest in the “Smoke Down Prohibition” protest in Philadelphia on May 19, 2013.

Blogger 12160 asked the owner of FreeAdamKokesh.com, IanCioffi, and received this reply: “purchased it for when I thought he’d be arrested on July 4th.” But as a 12160 commenter, Curtis, points out:

That free adam page was created IN ITS ENTIRETY and updated to what you see now ON THE 12th. FACT end of story Hes an agent

By his own admission Kokesh suffers from PTSD so severe that he has trouble handling large crowds; not a trait one would expect to find in a military commander. Another trait displayed by Kokesh that is anathema to any true Patriot is his support of terrorist groups Hamas and Hezbollah – Enemies of the United States – and radical anti-war activists including Iraq Veterans Against the War and Code Pink, that tried to deface the Vietnam War Memorial, an act of vandalism Kokesh himself attempted to participate in before the group was stopped by Honorable Vietnam Veterans at the 2007 Gathering of Eagles. Kokesh also counts the Occupy Movement, funded extensively by anti-American Jewish billionaire George Soros, as his allies.

The goal of Adam Kokesh’s armed march into DC is to give the government a “tiny revolution” they can brutally suppress to deter an uprising by the general population, which would be far more difficult to deal with.

Back in the 1960s, there was a member of the Black Panther party named Bobby Seale. He too called for armed marches, and as a result of those marches the corporate media demonized the Black Panthers as dangerous, and California passed some very restrictive (for the time) gun laws. Later it came out Bobby Seale was working for the CIA.

In 1970, anti-war activists on several Southern California organized a mass protest against the Vietnam war to take place along Harbor Boulevard in Anaheim, just outside the Disneyland theme park. Once there, the organizers led the protest inside the park itself, caused damage, took over Tom Sawyer’s island, and created a huge mess, which resulted in the National Guard being called in along with the media. By the next day the credibility of the peace movement had been utterly destroyed in the eyes of the public.  Some years later, when the FBI’s COINTELPRO scandal broke and the very legitimacy of the government was in question, Congress held hearings and it was then revealed that the entire Disneyland riot had been an FBI operation; the “organizers” all FBI informants on college campuses (which exist to this very day) and the whole plan to destroy the peace movement ordered by the Nixon White House.

Given Obama’s penchant for Nixonian tactics (like sending the IRS after political/ideological enemies) there is no reason to assume Kokesh’s stunt is not more of the same.

Yes Kokesh is a well known radio host. So was Hal Turner, who was revealed as working for the FBI, trying to incite his audience to acts that could be used to portray political dissenters in the most negative light.

The government likes to play dirty.

Let us not be suckers yet again.

This is all for show. His father [Charles Kokesh] is a multi millionaire venture capitalist (and race track owner) who was charged by the SEC in a $45 mill law suit. This is something Adam has never mentioned, ever.

If you research the time line, you’ll see that Adam entered the scene right about the time the Feds were wrapping up their case against his father. I can find no resolution to the case after almost 5 years.

This YouTube video points out that Kokesh’s call for an armed march on all 50 state capitals is a ruse so that participants would be identified and rounded up by the authorities:

In the last analysis, whatever and whoever Adam Kokesh is, we must ask ourselves this question:

Even if Kokesh is a true American patriot, instead of an agent provocateur working for Obama, what would be accomplished by armed marches on D.C. and on the 50 state capitals?

Are we that naive as to think that, when faced with hordes of armed American citizens, Pres. Lucifer and the 50 state governors would just say: “Okay, you win! Obama will vacate the White House and you guys choose the next president!”

It’d be funny if this isn’t such serious matter.

The Oathkeepers, very sensibly, are not endorsing Kokesh’s march and has issued this statement:

Oath Keepers does NOT endorse Adam’s march. The leadership at Oath Keepers has a wealth of tactical experience, and marching into the enemy’s camp, to be captured makes no sense. What is to be accomplished by this action? What could possibly go wrong? These are the questions a responsible leader asks before sending his troops into harm’s way. This is either tactical ignorance, or willful endangerment; the latter being the worst of the two choices.

I would say that Adam’s choice of the words “Oath Keepers” is no accident. He is VERY familiar with Oath Keepers and our mission. Not only are his tactics questionable, so are his ethics. Not only has he embarrassed himself by announcing a pointless and irresponsible armed march, he has damaged his integrity by using the good name of Oath Keepers to bolster his own agenda.

To conclude, there are many reasons to be dubious and wary of both Adam Kokesh and his called-for armed march. My advice to the political romantics who mean to heed his sirens’ call:

Dr. Eowyn is the Editor of Fellowship of the Minds and a regular contributor the The D.C. Clothesline.