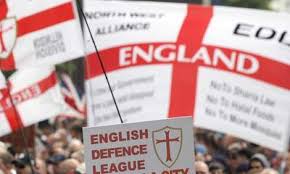 Allegedly, the cyber hacking activists known as Anonymous let it be known yesterday that they were launching Operation EDL, warning that the English Defence League (EDL), who took to the streets in protest following the Islamic Jihadist murder of British soldier Lee Rigby, would be “decimated” for its protests over the killing of Rigby. One has to wonder if this is the same Anonymous that allegedly hit government targeted websites for their corruption and injustice.

Not only are they issuing cyber-attacks against sites that have supported the EDL, but they also said they would expose the names, addresses and phone numbers of more than 1,000 EDL donors and members along with releasing the Twitter identities of hundreds of members. The BBC confirms that a list has been published today:

“Names and addresses of more than 200 people from all over the country are on the list.

The post from a group calling itself Anonymous UK also includes the mobile telephone numbers of people it claims to be senior members of the EDL.”

Freedom Fighter Radio (FFR) was among those hit. The site was downed early Monday morning by cyber-attack according to GoDaddy.com, the hosting provider.

Jim Stachowiak, who occasionally publishes articles for Freedom Outpost, found out late yesterday that the attack was indeed by Anonymous. The site is down now because of a distributed denial of service (DDoS) which is due to traffic being directed at his site by the tens of thousands. According to Stachowiak, he is now looking for his own server, instead of having a shared server to get his message out.

Interestingly enough, I host the FFR radio show with Jim and we were to have EDL leader Tommy Robinson on the show on Tuesday. We were unable to do it because of the site being down. That show has been rescheduled.

According to the group claiming responsibility, the EDL had “capitalised on the misfortunes of our peoples, taking advantage of moments of fear, terror and reconciliation to spread hatred and animosity towards your fellow man”. No mention was made about the jihadists capitalizing on the murder of an innocent soldier and taking to the television to promote the teaching of the pedophile madman Muhammad.

What a beautiful sight!Blank error pages rather than a site full of racism and bigotry! #EDL website under huge #DDoS twitter.com/Op__EDL/status…

If whoever is doing this had the intellect to reason from what has been said, they would know this has nothing to do with race, but ideology. After all there are whites, blacks and Middle Eastern people along with a whole host of ethnicities who are Muslim. Anonymous has only demonstrated what angry bigots they are against those they oppose.

One wonders why Twitter has not intervened and not closed the account and involved authorities, along with others that might be considered to be accessories in the criminal activities of the group.

Allegedly, Anonymous put forward this statement against he EDL:

“We have been patiently observing your organisation as you have [indoctrinated] our young with your criminal mindset.

“Your constant belligerence, like a pack of raving ignoramuses, furthers only bigotry and segregation. You have angered us considerably and summoned our wrath irrevocably.

“Last week, an innocent drummer, Lee Rigby, lost his life at the hands of two vile and demented human beings in the most horrific and heinous manner ever witnessed on the streets of Britain.

“This villainous public display has thrown the United Kingdom into mourning; every community and every congregation extending their deepest condolences.

“You, however, have used this as another excuse to further spread your campaign of hate, bigotry, and misinformation. Under the guise of national pride you have instigated crimes against the innocent and incited the subjugation of Muslims.

“We will not allow your injustices, your lies, and your stupidity, to further radicalise our youth into fearing and despising their fellow man.

“We will begin the systematic and comprehensive decimation [sic] of your cult.

“You will fall, we can say this with complete confidence. We are everywhere, you cannot hide, you cannot win.”

Whoever is engaging in this seems to be completely unaware that the majority of what EDL does is not via the internet, but takes place in real life, like the protests that took place on Saturday.

I love how the media is on the side of the Jihadists though. It’s really quite telling. The Guardian posted that since Rigby’s murder there have been 200 “Islamophoic” incidents and they want to pin it all on the EDL. They write as though there was not a “non-Islamaphobic” murder that took place in their streets just days before. Pray tell, why is there no real recognition of the face of Islam as presented by Michael Adebowale and Michael Adebolajo, Rigby’s murderers. The police should have done London and favor and made sure these two men were dead on the scene.

What are the reporters in England going to do when the people have had enough and stop protesting and start actually engaging in war against the enemy, Islam? My guess is that they, along with the spineless effeminate political leaders like David Cameron and Boris Johnson, will join the ranks of those attempting to destroy their country, ie. Islamists.

I’ll simply say that I stand with the EDL and support their efforts to rid their country of the Islamic ideology that is destroying it.