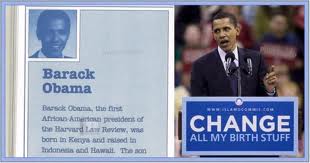 First, Grandma Obama said she saw with her own eyes the birth of baby Barack Obama in Kenya.

Then, a Nigerian newspaper described Obama as ”born in Kenya.”

Next, in a speech in Denver in 2008, Michelle Obama referred to Kenya as her husband’s “home country.”

Then, National Public Radio in 2008 referred to then-Senator Obama as “Kenyan-born” and a “son of Africa.”

Next we have a Kenyan government official, Minister of Lands and member of Parliament James Orengo declaring to Kenya’s parliament in March 2010 that Obama was born in Africa and is therefore “not even a native American.”

Mr. Conservative reports that American missionaries in Kenya are being told by the ordinary people they encounter that the POS was born in their country.

Lisa is an American missionary. She traveled with several members of her Baptist church to Kenya in August of 2012 and spent 10 days caring for the children in three different orphanages in a small village about three hours northwest of Nairobi. Lisa said that on three different occasions, in three different areas, highly educated Kenyans told her team that Obama is from Kenya.

Lisa told Mr. Conservative that the wealthier, educated Kenyan villagers spoke three languages: English, Swahili and Kukudo, the native tongue. She said: “It was the educated people who spoke to us [about Obama.]” Although nearly all of the villagers lacked cell phones and Internet is “very limited,” she noticed that they still paid attention to foreign affairs: “You’d see them standing around the street corners reading newspapers.”

About three days into the missionary trip, Lisa and her team were “sitting around, just completely relaxing and playing games, singing songs and doing crafts with the children when—out of nowhere—the orphanage matron (who spoke English) came up to Lisa and asked: ‘Where are you from?’”

Lisa answered: “Our team is from Alabama.” The matron responded: “Where’s that?” So, Lisa pulled out a map of the U.S. and all of the children and the orphanage staff came over and she showed them Alabama on the map. The matron exclaimed, “Oh, your president, Obama, he’s from here!” And they pointed off into the distance to a nearby village, indicating Obama’s birthplace.

Lisa says: “We were just completely shocked. We didn’t know what to say. Butthey acted like it was common knowledge. The other orphanage staffers (who did not speak English) gathered around the matron and were nodding and saying: ‘Yes! Yes!’ in agreement. In their mind, they were just so excited and proud of the fact that our president was from there. It was like he was their homeboy.”

The same thing occurred when Lisa and her team were chatting with some ladies at the orphanage. Lisa said,  “The parents were teaching their kids that ‘even they could be the president of America,’ as a way to inspire them to big dreams. […] I [tried] to correct the first lady who said that Obama was born in Kenya by saying, ‘No, I think he was born in Hawaii,” and she said, “No, no, he was born here. We are very proud. He is Kenyan.’”

Lisa’s son-in law also vouches for this story since he Skyped with her immediately after it happened and remembers it very clearly.

There was a third occasion. Lisa and her son were shopping in the village and some of the educated villagers approached them and said the same thing about how Obama was born in their neighboring village and how proud they were of this fact. Lisa says: “The thing that made it the most believable was that it wasn’t a big deal to them. It was just sort of happenstance.”

Conclusion: All of these many Kenyans, especially the POS’s Kenyan grandma, must all be crazy! [snark]