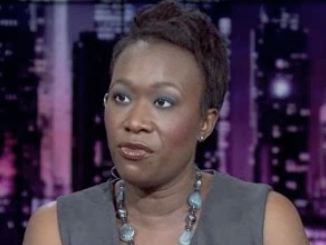 Yesterday Joy-Ann Reid, managing editor of The Grio,  went on a rant about gun owners and 2nd Amendment advocates and laid blame for the ricin letters squarely on the shoulders of gun-loving Americans. The rant happened during an MSNBC broadcast hosted by Thomas Roberts. Another member of the panel, Buzzfeed’s Evan McMorris-Santoro, attempted to push back and mentioned the LGBT community. He related this story to Floyd Corkins who attempted to shoot up the Family Research Council and planned to smear Chick-fil-A sandwiches in his victim’s faces. His point was that there was not a public outcry against the whole LGBT community over this event. Here is a video of Reid’s comments:

“The Dark Side of the Gun Debate?”

Let’s get to the truth here. The man who is being questioned for the latest round of ricin letters to Obama and Bloomberg is not fairly connected to the man who sent letters to Obama and Wicker. What do we know about the latest person of interest? He is from Texas and he is a civilian employee of the Department of Defense. Wait a minute here. Didn’t the Department of Defense just announce a furlough for all civilian workers? Is it possible that he might be angry about losing his job temporarily? I think that’s a distinct possibility Ms. Reid. The New York Post reports:

Federal agents are questioning a Texas man in connection with the mailing ricin-laced letters to Mayor Bloomberg and sending a similar missive to President Obama, the Post has learned.

Agents nabbed the man in New Boston, Texas, after his wife discovered a Tupperware container filled with suspicious material resembling ricin in their refrigerator and called cops, sources said.

She also found Internet searches on ricin production and Internet inquiries into both Obama and Bloomberg, sources said.

The unidentified man is in police custody but has not been arrested.

The Texas man is described as an Army veteran who is a current civilian employee with the Department of Defense. He has connections to Shreveport, La. and to Texas but is not considered a suspect at this time, NBC News reported.

It’s pretty obvious that this gentleman has other reasons to be mad that have nothing to do with gun ownership. If I wanted to throw people off my tracks I might mail letters to Bloomberg and Obama just to make it look like a “gun nut” did it. But no matter what he was angry about I think we need to accept that there is a distinct possibility that it has nothing to do with the 2nd amendment. If I were getting laid off for 11 days I might be a little angry too, especially when I see hundreds of millions of dollars flowing overseas while our country is in a deep recession.

The Grio has a left agenda and always has. For those of you who don’t know, the Grio is owned by NBC. They display the Peacock proudly on their website at TheGrio.com.

I can understand an assumption that letters going to Obama and Bloomberg would signify a “gun nut” but we all see what happened with the first set of letters. Some wacko attempted to frame an Elvis impersonator. The point is that we don’t know and even if we did, by liberals own theology it is unfair to judge a whole group by the actions of a few.

Why aren’t you hammering people who watch the AMC show Breaking Bad, Ms. Reid? For those of you who don’t know, this popular drama had an entire story line based on assassinating a rival drug lord with ricin.

Have those on the left ever really analyzed why there is an alternative news movement? It’s because people in this country are waking up and realizing that they can not trust a word that traditional media is trying to sell them.

A reporter’s job is to report the news. If journalists would have taken that job seriously over the years, and covered stories without obvious bias, then people like myself would have no reason for being here.

What I am telling you Ms. Reid is that you almost got it right. Almost. Yes there is an angry undercurrent of 2nd Amendment supporters in this country and a few of them might resort to occasional stupidity. But they are not to blame and I am not sure that a DoD worker who is getting ready to get furloughed belongs to this group. I think his anger may be focused on a government who is about to lay him off.

But let’s just say, totally hypothetically, that this man is angry about guns and that he does in fact end up being the culprit.

By your own set of standards we must dig deeper and show how these poor oppressed gun owners are victims. Victims of who?

Ms. Reid. You created us.

If you want the hate to stop then stop preaching hate. It’s as simple as that.

In the mean time do us all a favor and shut your pie hole. Your ignorant statements just give another nutjob a reason to get angry and do something stupid.

That would certainly make you happy in a sadistic sort of way. Any time you see some right-wing extremist do something stupid it is another feather in your cap.

With all due respect Ms. Reid, if gun owners get much angrier in this country it is not ricin beans that you need to be worried about.