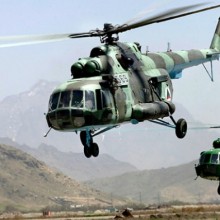 Remember when Barack Obama was caught on a hot mic telling Russian President Dmitri Medvedyev to let incoming Russian President Vladimir Putin know that after his re-election he would have more “flexibility”? If you don’t remember, check it out here. If you do, well now we are seeing a bit of that flexibility in motion. The Obama Department of Defense is going to spend nearly $700 million to buy Russian Mi-17 helicopters for the Afghan Air Force.

That’s right, $700 million of U.S. taxpayer money is going to fund our enemy’s air force. However, not only could this be considered treasonous, but even by the federal government’s 2013 National Defense Authorization Act they are in violation of their own legislation.

According to Riz Novosti:

WASHINGTON, April 4 (By Maria Young for RIA Novosti) – The US Department of Defense said Thursday it plans to sidestep a Congressional ban to purchase 30 helicopters from Russian state-owned defense firm Rosoboronexport, despite objections from US lawmakers who allege that the firm has equipped the Syrian government to commit brutal crimes against civilians.

The 2013 National Defense Authorization Act, approved by Congress last year, includes an amendment that prohibits financial contracts between the United States and Rosoboronexport, except when the Secretary of Defense determines that such arrangements are in the interest of national security.

“Given current timelines, the department has determined that Rosoboronexport is the only viable means of meeting ANSF requirements” for the helicopters, Gregory said.

The contract totals $690 million, most of which would go to the Russian arms maker, he added.

Well the Obama administration doesn’t want the U.S. economy to actually improve, that’s why they aren’t spending here. It seems this is also a bit of the flexibility he spoke of in 2012 and maybe a bit of payback to President Putin. Also, the Afghans have been trained to operate Russian aircraft, so switching to a new platform would delay the transition by three years, according to Gregory.

The reason for helicopters in Afghanistan is due to the fact that Obama made plans back in February to reduce the number of US troops in Afghanistan from 66,000 to 34,000 over the next year. This would set back the Afghan nation’s security force, according to the administration

The reason for purchasing from the Russians? Simon Saradzhyan, a security expert at Harvard University’s Belfer Center for Science and International Affairs, said “The objections are understandable, the US defense industry needs contracts. … But from a cost-benefit analysis, Russian helicopters are a better deal.”

Apparently, it’s also against the law.

“This is the Russian competitive edge,” Saradzhyan said. “They cost less and they are easy to maintain. This is how Russian arms supporters make their sales speech.”

Analyst Daniel Greenfield, in a piece for FrontPage magazine, noted:

“Aside from throwing almost $700 million to a company owned by the Russian government at a time when Obama has taken a chainsaw to the United States military, subsidizing the Russian defense industry helps it develop more weapons that will be sold to America’s enemies. That money will help fund R&D for the next generation of weapons that an American military dismantled by Obama will be facing on the battlefield.”

In a letter sent by a bipartisan Congressional group led by Rep. Rosa DeLauro (D-CT) to Defense Secretary Chuck Hagel on March 25 they wrote, “We write to oppose any continuation of the Department of Defense’s (DoD) business relationship with Rosoboronexport, Russia’s primary arms exporter and an enabler of the ongoing mass atrocities in Syria.  In January, Section 1277 of the National Defense Authorization Act for Fiscal Year 2013, which expressly prohibits the use of funds to enter into any contracts or agreements with Rosoboronexport, was enacted into law. Further, during consideration of the Department of Defense Appropriations Act, 2013, the House of Representatives overwhelmingly approved an amendment prohibiting further contracts with Rosoboronexport by a vote of 407-5. We urge you to uphold this law and clear expression of Congressional intent by ensuring that any further DoD procurement of helicopters for the Afghan National Security Forces is not conducted through Rosoboronexport.”

The letter asked “What is the national security justification of continuing business with Rosoboronexport?”

“Russia continues to transfer weapons through Rosoboronexport to the regime of Bashar al-Assad in Syria,” the letter continued. “Since the Syrian uprising began, Russia has continued to serve as the Assad regime’s chief supplier of weapons, enabling the mass murder of Syrian citizens at the hands of their own government.”

The Department of Defense contract with Rosoboronexport, awarded by the Department of the Army on June 1, 2011, on a sole-source basis, procures at minimum 21 Mi-17 helicopters and spares for the Afghan military. The contract has a total value of nearly $1.0 billion and includes options for additional aircraft, spares, and support. The Department has indicated that the procurement of additional Mi-17 for the Afghan military may be required. The actual number of helicopters could be as high as 30.

Forbes points out that this is not the first time the U.S. provided this “flying whale” abroad. “It gave four Mi-17 helicopters to Pakistan to assist its anti-terrorism activity in June 2009. The U.S. Navy delivered four Mi-17s to the Afghan National Army Air Corps in September of that same year. Ten Mi-17-V5 helicopters were delivered to the Afghan Air Force (AAF) by December 2010.”

The Pentagon has already spent $411 million with Rosoboronexport since May of 2011, so this will bring the total in excess of $1 billion of taxpayer funds that have been spent with the Russian supplier.