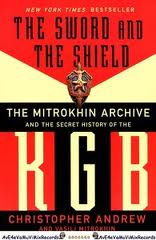 Obama needs to fire some speech writers. This is most likely a coincidence but you never know who might be trying to insert some hidden symbolism. As I was looking through Trevor Loudon’s blog I saw an interesting reprint from The American Spectator. It brought something to light that most of us missed for a week. In Obama’s counterterrorism speech last week he referenced a very powerful KGB symbol. In fact he referenced, what is for all intents and purposes, the KGB logo.

“Our victory against terrorism won’t be measured in a surrender ceremony on a battleship, or a statue being pulled to the ground. Victory will be measured in parents taking their kids to school; immigrants coming to our shores; fans taking in a ballgame; a veteran starting a business; a bustling city street. The quiet determination; that strength of character and bond of fellowship; that refutation of fear – that is both our sword and our shield.”

If you want to verify this symbolism you can go to Wikipedia.org:

Sword and shield can refer to:

I am not about to go “tin foil hat” on this one but I do think it was an interesting choice of words. Do I believe Barack Obama is a KGB operative? I don’t know. I don’t really care to be honest because wherever he is from it sure as hell isn’t from my planet.

The truth of the matter is that whether this was a planned insertion into the speech, or not, doesn’t matter. Whether Obama officially works for the new version of the KGB does not matter either. He is a Communist at heart with numerous known Communist contacts and America is in serious trouble. Have you seen the interview with Yuri Bezmenov? This man basically predicted our current political climate some 30 years ago.

For those who would like to do extensive research on this topic I would highly recommend getting yourself a copy of Agenda: Grinding America Down

. If there is one movie that I would suggest that every American watch, this would be it. It is by far the best Barack Obama documentary ever made. The movie details excerpts from The Naked Communist that were entered into congressional record over 50 years ago. It shows how almost every single one of the communist goals for the destruction of America have been achieved and also documents Barack Obama’s communist ties in an easy to understand format.

As for the “Sword and Shield” reference? Who knows? But there is no lack of cockiness coming from this administration. Most of us would agree with that.