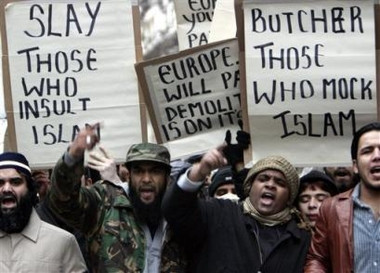 I read something today that left me a little perturbed. OK that’s an understatement. It left me furious. I will dispense with the profanity for now and attempt to keep it clean but I’m angry. Sometimes I just need to take off on a quick rant. It makes me feel better. I read an article from WND that seems to hint that those of us who dare speak against Muslims might soon find ourselves prosecuted for nothing more than free speech. Here is an excerpt:

Bloggers beware. And those who use email, too. And those on Facebook. And Twitter. And anyone else using social media: Diss a Muslim and the Department of Justice will be on your case with the full weight of federal law.

The Obama administration, which is launching a series of Muslim Outreach Summits so that Islamists can tell federal officials how they better can serve that community, says it also is holding educational outreaches to let people know that Internet postings that violate civil rights are subject to federal prosecution.

Bill Killian, U.S. attorney for the Eastern District of Tennessee, is scheduled to appear at an event sponsored by the American Muslim Advisory Council of Tennessee next week, and will “provide input on how civil rights can be violated by those who post inflammatory documents targeted at Muslims on social media,” according to a report in the Tullahoma News in Tennessee.

He said everyone needs to understand that Internet postings that violate civil rights are subject to federal jurisdiction.

I blocked a friend on Facebook about a year ago. He is a Pagan who decided to put some hate speech about Christians on his timeline. I hit the delete button. I consider myself a Christian, though I will never claim to be the epitome of Christianity, and I was offended.

In a shocking turn of events I did not seek him out and cut off his head with a machete. Even more surprisingly he did not kill me and eat the heart from my chest. We don’t roll like that. We disagreed and we are no longer friends. End of story.

There will be no Sharia Law in my country. I understand that no Muslim wants Allah or their Prophet slandered and I understand that if that happens that they demand justice. But America does not work like that and never will.

We have free speech here. In this country I am allowed to hate what Fred Phelps has to say but I am not allowed to shut him up. Westboro Baptist Church can spread their “God Hates Fags and Fag Enablers” message all over the country. They protest at military funerals and take advantage of every media opportunity available. They are allowed to continue. It is called the first amendment.

Don’t you think that most Christians are a little offended by Phelp’s teachings? I am. But the truth is that it is allowed to continue for two reasons and neither of them are about free speech:

I wrote an article some time back on that subject. Anyone who wants to read it can click here. I don’t think it was very intriguing because not many people read it. But I believe it is truth. My belief is that Fred Phelp’s message is not protected because of the first amendment but simply because he is part of the plan.

He makes hating homosexuals seem so very uncool that people are actually driven closer to full acceptance every time he or WBC speaks. It’s classic “useful idiot” theology. Anyway I digress… Regardless of my opinion on that topic, if Fred Phelps and Westboro Baptist Church can hide behind the 1st Amendment then I will too.

I won’t go out of my way to spread hate about Muslims. But you better believe that any time someone pulls a stupid Jihad move I will report it and you can not shut me up.

We have a country that is arming Al Qaeda linked Syrian Rebels.

We have strong evidence to suggest that we were funding Al Qaeda in Libya and that may be the reason for the Benghazi cover up.

We continue to send money to an Egyptian government that allows constant persecution of Christians.

John Kerry is putting together stimulus packages for Palestinians now.

You think that a few threats are going to shut us up? You can lock me up for a short time I am sure. But in the end it will be just another case similar to that of Brandon Raub. Oh yeah, remember Brandon Raub? He made some Facebook posts that were considered offensive and found himself in a mental ward. No charges were ever filed.

If people choose to live in this country then they need to learn to live by our rules.

We all get offended sometimes.

If you really think that we are going to allow you to start locking people up because they happen to make an off color remark about Muslims (or any other group) then you have another thing coming.

In America we have the right to offend whomever we want.  I plan to keep speaking the truth. I can not control how you react to it.

How do you think those soldiers in Afghanistan feel about you arming their enemies? You sent them to fight and die halfway across the world and now it’s OK to provide aid to Al Qaeda? How do you think the families of fallen soldiers or victims of 9-11 feel?

Too many people are counting on the truth.

You will not continue to shred The Constitution and get by with it.