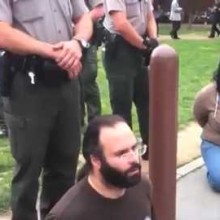 A video that runs approximately 13:00 minutes records an ironic incident that took place on Saturday May 18 and documents the incident of Mark and Barb, a couple who were engaged in handing out flyers and talking about ending the Federal Reserve system in the City of Brotherly Love, Philadelphia, Pennsylvania. They were detained and hand-cuffed for passing out flyers and engaging in free speech.

According to Mark Passio, “On Saturday, May 18th at 3:00 pm, I was walking with my wife Barb in Philadelphia from Market Street to Chestnut Street between 5th and 6th Streets, and handed out a few fliers about how the Federal Reserve Bank is de-valuing our nation’s currency to people standing in the line at the Liberty Bell location (something I have done almost 20 times in the past).

He then engaged a couple of people who asked him for the information he was speaking about. Following that encounter, he and his wife walked to Chestnut Street and they were stopped by two Park Rangers. They were told they could not be handing out flyers.

According to Mark, they had finished handing out flyers for the day, but still had a few in their hands.

“They began citing some obscure federal regulation that I had never heard of,” Mark said. “I calmly told them that I was peacefully exercising the Rights of Free Speech and Free Press as I was walking through the area, which are Natural Rights which cannot be granted by man, nor alienated from man, and which they do not have the “right,” regardless of what the terms of their “job” may tell them, to usurp from me or to stop me from exercising.”

Mark informed them that the unalienable rights to Free Speech and Free Press were also guaranteed and protected by the First Amendment of the Constitution of the United States of America. He added that the Constitution is the highest legal document of American law and certainly trumps and negates any un-Constitutional federal regulation which they were quoting to him and his wife.

He then calmly informed them that they were violating those rights by attempting to stop people from exercising them and claiming that our free speech can be invalidated by an obscure regulation.

Additionally, Mark said that the Park Rangers told him that he would have to pay the Federal government for permission to exercise his free speech via a permit.

He then attempted to walk away, but what happened next is quite frankly chilling. “They appeared to be viciously angered at my declaration that I had engaged in a peaceful activity that was a Natural Right, and that they had no right to attempt to stop me from exercising it,” he said. “Along with many other Park Police who had gathered while I was speaking to the original two officers, they followed me and Barb onto Chestnut Street, violently stopped us from proceeding on our way, put handcuffs on both of us (mine were applied so tightly that I have lost feeling in a large portion of the top of my left hand and will need to see a doctor about possible permanent nerve damage), unlawfully arrested our freedom of movement for over 20 minutes, unlawfully searched my person when I told them that I did not consent to any searches, stole my property in the form of the remaining fliers which I had paid to print, and, adding insult to injury, also stole a $20 bill from my wallet, which I discovered was missing when they returned it to me, after releasing us.”

They attempted to cite Mark, but Mark says that he would not accept that he had done anything morally wrong and when they threatened him with a warrant for his arrest, he continued to refuse.

In the video, the guy filming captures the badge numbers and a couple of names of the Rangers “guarding” the couple. Mark is clearly making people aware of what is taking place as his wife speaks to the camera man. Mark even calls upon police across the street to “do their duty” against the tyranny taking place. The officers stand quietly and cowardly by on the other side of the street.

One woman walks up with her son and was appalled, saying that her great grandfather signed the Declaration of Independence just across the street, and this is what they are teaching the children.

It’s amazing that they were treated like criminals and forced to sit handcuffed for merely exercising their free speech to other people in the very vicinity of where the Founders declared independence! Simply amazing!

I’d say it was time to burn up some emails and telephone lines on these thugs. Honestly, if you look, there were about 10 Park Rangers around this couple. It is shameful what these Rangers were engaged in. This couple was not a threat to anyone and yet they were handcuffed and guarded.

Contact information for the Park Rangers Gestapo can be found here.