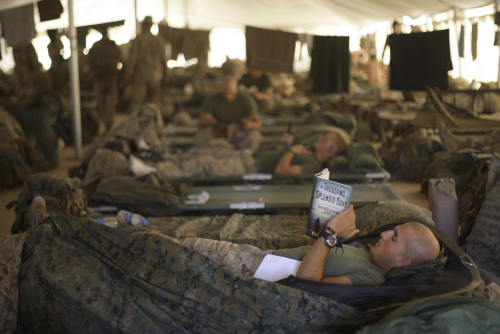 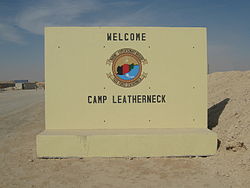 Marines at Camp Leatherneck in Afghanistan are losing midnight meal services, starting today, that means many of them will miss a hot breakfast and others will work extended shifts without being able to fill their tanks with cooked food. It is just the latest in a long series of policies that take away from those who have given us their all.

Marines at Camp Leatherneck in Afghanistan will lose a key daily meal starting Saturday, causing some to forgo a hot breakfast and others to work six-plus hours without refueling on cooked food, according to Marines at the base and Marine Corps officials.

The midnight ration service — known there as “midrats” — supplies breakfast to Marines on midnight-to-noon shifts and dinner to Marines who are ending noon-to-midnight work periods. It’s described as one of the few times the Marines at Leatherneck can be together in one place.

The base, which is located in Afghanistan’s southwestern Helmand Province, flanked by Iran and Pakistan, also will remove its 24-hour sandwich bar. It plans to replace the dishes long offered at midnight with pre-packaged MREs, said Marine Corps Lt. Col. Cliff Gilmore, who has been deployed in Afghanistan since February.

The moves, though unpopular with many Marines on the ground and their families back home, are emblematic of the massive drawdown of American troops in Afghanistan and the dismantling of U.S. military facilities. More than 30,000 U.S. service members will leave Afghanistan in coming months as the U.S. prepares to hand responsibility for security to Afghan forces in 2014.

While no Marine at Camp Leatherneck agreed to speak on the record, many are privately angry about the hit on base morale.

While I understand that troop withdrawal is happening and I can fully understand the explanation that is being given, I can in no way accept it as an adequate excuse. My belief is that we owe everything we have in this country to God and the American Warrior.

I understand that Marines are tough. They are America’s finest. I also understand that these Marines have earned a little more respect than this. They put their lives on the line for us daily while we sit at home and eat hot pockets and drink cold beer, while watching re-runs of Friends.

Many of them would love to have just one night of that lazy lifestyle but they have chosen to be a part of the “dangerous freedom” that Thomas Jefferson talked about.

They deserve much better than this. The good news is that most of them will be home soon.

It’s about respect. This country does not seem to respect those who serve and that is a shame. We have waited almost four years now for the accused Fort Hood killer to go to trial and it has still not happened. To add insult to injury Nidal Hasan has been paid $278,000 as he awaits trial and the Army classified the incident as “workplace violence” which is keeping many injured survivors from benefits that their families need. So let’s not make this about fiscal responsibility. Why start now?

How would you like to spend your final months in Afghanistan without hot food and come home to the honor of holding Obama’s umbrella?

Marines are better than that.

This may seem like an obscure and insignificant story to some but to me it has nothing to do with a sandwich bar or a hot bowl of soup and everything to do with a growing level of disrespect for our nation’s finest.

If any of you jarheads in Afghanistan are reading this, Thank You for your service.