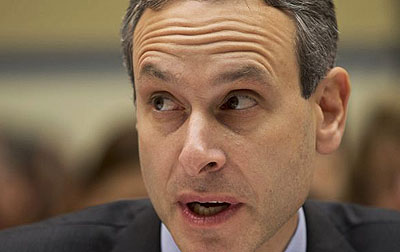 The IRS scandal grows crazier every day. A few days ago it was reported that Douglas Shulman, former IRS commissioner, had 157 White House visits during his tenure. According to The Daily Caller, “publicly released records show that embattled former IRS Commissioner Douglas Shulman visited the White House at least 157 times during the Obama administration, more recorded visits than even the most trusted members of the president’s Cabinet.”

Now it is being reported that Shulman’s wife, Susan Anderson, is a senior program advisor for an organization which could have had very much to gain from IRS targeting of certain groups. The Daily Caller reports:

Former Internal Revenue Service commissioner Douglas H. Shulman, a frequent White House guest during the period when the IRS was targeting conservative nonprofits, is married to the senior program advisor for Public Campaign, an “organization dedicated to sweeping campaign reform that aims to dramatically reduce the role of big special interest money in American politics.”

The IRS is under fire for improperly scrutinizing the tax-exempt nonprofit status of conservative groups between 2010 and 2012, demanding conservative training materials, personal information on conservative college

interns and even the content of religious groups’ prayers. IRS supporters have defended the beleaguered agency by railing against outside spending and special interest money supposedly pumped into the 2012 campaign by conservative benefactors.

One of those defenders is the group of which Shulman’s spouse is an executive.

Shulman’s wife Susan L. Anderson is the senior program advisor for the Washington-based nonprofit organization Public Campaign, which claims that it “is laying the foundation for reform by working with a broad range of organizations, including local community groups, around the country that are fighting for change and national organizations whose members are not fairly represented under the current campaign finance system.”

Was Public Campaign involved in the IRS scandal? At the very least we have uncovered a major potential conflict of interest. Public Campaign would certainly have a genuine interest in some of these organizations being targeted. Let’s not forget that one of the alleged targets was Karl Rove’s Crossroads GPS. USA Today reported on May 20th:

Crossroads GPS, a Republican group that was one of the biggest spenders in the 2012 elections, claims it also was singled out for extra scrutiny as part of the Internal Revenue Service’s targeting of conservative organizations.

Crossroads GPS, founded with help from GOP strategist Karl Rove, applied for formal recognition as a tax-exempt group in September 2010 and has not received it, spokesman Jonathan Collegio said.

“From everything we know … Crossroads was one of the targeted groups,” he said. He refused to discuss any specific actions or inquiries from the IRS. Crossroads spent at least $71 million to influence last year’s presidential and congressional elections.

Here’s a simple question. Do you think that Shulman’s wife’s organization, Public Campaign, would have any interest in Crossroads GPS? $71 million is a lot of money and that seems to be the exact sort of thing that Public Campaign is fighting against.