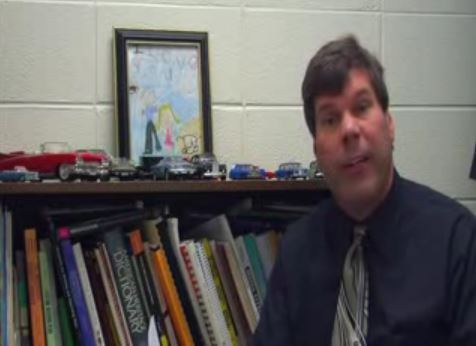 A journalism professor at West Virginia’s Marshall University, with the appropriate last name of Swindell, calls Sarah Palin a “half-wit” and members of the National Rifle Association “treasonous” and deserving of the “firing squad.” Swindell also favors the military’s violent suppression of gun rights advocates.

Here’s Christopher Swindell’s op-ed, with the erudite title “Gun safety debate is B.S.,” in the Charleston wvgazette, May 20, 2013:

Watching the celebration at the NRA convention over the defeat of background checks was the most nauseating experience of the day.

I am not a New York gun control liberal, either. I support a shotgun for home defense, a handgun for limited conceal/carry, and an assortment of hunting rifles to balance West Virginia’s exploding deer population (as evidenced by hourly collisions with cars). So, I am hardly out of the mainstream.

But, the gun safety debate is B.S. This foaming at the mouth, Obamar is coming for the guns, Nanny Bloomberg is a bad billionaire, and most despicable of all, those survivors and victims are pawns in the liberal agenda is knuckle-dragging Cretan talk.

And no matter how many times Sen. Joe Manchin tries to explain his compromise (a decent attempt thwarted by extremists), the hard right lies and foams. The repeated lies now seem like the truth, what with the likes of Sen. Kelly Ayotte telling them.

Probably the most serious miscalculation opponents make is the guest list for the NRA speaker’s podium. To let the half-wit half-term quitter Sarah Palinhave a microphone is to alienate the very people Republicans need to work with on future legislation. To say nothing of the other speakers.

And how does choosing a white, rich old man with an offensive degrading speech about the war of “Northern Aggression” as NRA president forward a sense of reasonableness? History lesson: It was an awful Civil War won decisively some 150 years ago. Over slavery. The Confederacy wanted to keep African-Americans in chains and President Lincoln didn’t.

Sure, there were states’ rights issues, but nullification, secession, and treason were settled at Appomattox Courthouse. Sure, Reconstruction left a bad taste. But, resurrecting these same things, the way South Carolina is as we speak, is to invite a return to the whole concept of a Union.

Here it is. The NRA advocates armed rebellion against the duly elected government of the United States of America. That’s treason, and it’s worthy of the firing squad. The B.S. needs a serious gut check. We are not a tin pot banana republic where machine gun toting rebel groups storm the palace and depose the dictator.

We put the president in the White House. To support the new NRA president’s agenda of arming the populace for confrontation with the government is bloody treason. And many invite it gladly as if the African-American president we voted for is somehow infringing on their Constitutional rights.

Normally, I am a peaceable man, but in this case, I am willing to answer the call to defend the country. From them.

To turn the song lyric they so love to quote back on them, “We’ll put a boot in your —, it’s the American way.”

Except it won’t be a boot. It’ll be an M1A Abrams tank, supported by an F22 Raptor squadron with Hellfire missiles. Try treason on for size. See how that suits. And their assault arsenal and RPGs won’t do them any good.

So, to return to reality, all of us. Let’s make common sense gun safety a deciding issue for 2014 and beyond. The NRA certainly has. Let’s push back. We the People. The 85 percent who support more robust background checks. And when the next domestic terrorist with an assault rifle comes along, we can blame the leaders and fringe of the NRA for arming them.

Here’s Swindell the hypocrite in a Feb. 2011 YouTube video, about how America is divided between the Left and Right, and preaching that the solution is for the bitter partisans to just “stop it.”

Click here for the names of Marshall U’s Board of Governors.