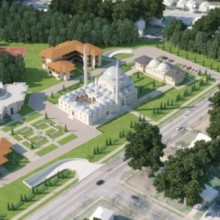 Just a couple of weeks ago Barack Obama welcomed Turkish Prime Minister Recep Tayyip Erdogan to the White House, who also brought along the father of one of the Islamic jihadists who was killed in a raid on a Gaza flotilla in 2010. The Turkish Prime Minister is known for pushing for Islamic jihad with his statement, “The mosques are our barracks, the domes our helmets, the minarets our bayonets and the faithful our soldiers.” Upon his visit to the states, he went to Lanham, Maryland to visit the 15-acre site of a $100 million mega-mosque called the Turkish American Culture and Civilization Center, which according to Muslim Link, “will likely become the largest and most striking examples of Islamic architecture in the western hemisphere” when it is finished in 2014.

The Founders are rolling over in their graves right now. Maryland, the state that claims to be “The Free State” has recently has sweeping gun control measures placed upon its citizens through tyrannical means and now will welcome in the enemy to America and Christianity, Islam with the western Hemisphere’s largest Islamic mosque. Does anyone else see sharia law taking root in Maryland next?

Upon Erdogan’s visit to the site, Maryland decided to have one of its representatives there as well, Secretary of State John McDonough.

On May 15, Prime Minister Erdogan spoke to hundreds of people at the construction site and said he’d come back for the opening ceremony next year. He warned the audience that there are groups promoting “Islamophobia,” branding potential critics as paranoid bigots. Erdogan recently said that “Islamophobia” and Zionism are equivalent to fascism and anti-Semitism, saying they are a “crime against humanity.”

On this trip to the U.S., Erdogan brought the father of one of the Islamists killed while on a Turkish flotilla which was trying to break Israel’s weapons blockade on Gaza. Gaza is controlled by Hamas, which is a designated terrorist organization by the U.S. State Department. Erdogan reportedly wanted to him to meet President Obama. (In the end, the father met with Secretary of State John Kerry.)

The leaders of two U.S. Muslim Brotherhood entities in attendance included Naeem Baig, is the president of the Islamic Circle of North America (ICNA). A 1991 U.S. Muslim Brotherhood memo lists ICNA as one of “our organizations and the organizations of our friends.” The memo says its “work in America is “a kind of grand jihad in eliminating and destroying the Western civilization from within.” The memo even refers to meetings with ICNA where there was talk about a merger.

Interestingly enough the ICNA is linked to the Pakistanit Islamic group Jamaat-e-Islami which hosts jihadists at it conferences.

The second Muslim Brotherhood entity at the event was Mohamed Magid, the president of the Islamic Society of North America (ISNA). Remember how we told you they were openly supporting attacks on the Second Amendment? They’ve already been doing it in Maryland. Now they are celebrating with this mosque. Maryland, your children are next for indoctrination.

The Clarion Project also has described the “growing ties between the Turkish government and Native American tribes. With Congress’ help, thousands of Turkish contractors and their families may be flooding into America’s heartland and settling in semi-autonomous zones of the Native Americans, well out of the reach of American authorities.”

This is what many in our country do not understand today. They do not understand how the alleged “peaceful” Muslims are working on stealth jihad, using willing accomplices that they claim to agree with on certain issues to advance their Ummah, or Islamic state. Additionally, this is why Islamists will not raise their voices against terrorist attacks. It’s not because they are scared. It’s because jihad take place on a variety of levels. Beware of those who come to you telling you Islam is a religion of peace. It is anything but, and its history is filled with the bloody reality.