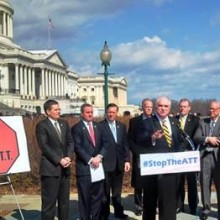 The United Nations Arms Trade Treaty (ATT) is scheduled to be signed by Barack Obama on June 4, this Monday. He has already said he will sign it. However, the United States Senate passed a resolution that they will not ratify the document. Now a letter has been sent to Barack Obama and Secretary of State John Kerry by 130 members of the House of Representatives opposing the ATT.

On May 30 the 130 congressmen wrote to remind both Obama and Kerry that they are supposed to be “defenders of the sovereignty of the United States and as such the representatives wrote to “express…grave concern about the dangers posed by the United Nations’ Arms Trade Treaty.”

According to the letter, “Our country’s sovereignty, and the protections it affords our individual freedoms, including those recognized by the Second Amendment, must not be infringed.”

The letter then went on to cite three reasons not to sign the treaty:

The congressmen expounded on the flaws of the treaty. They wrote, “It includes only a weak preambular reference to the lawful ownership and use of, and trade in, firearms, and recognizes none of these activities, or personal self-defense, as inherent rights. It frequently employs the term “end users,” which can refer to individual firearms owners, and, in its sixth Principle, it creates a national “responsibility” to “prevent … diversion” of firearms, a requirement that could be used to justify the imposition of further controls within the United States.”

“This risk is enhanced by Article 5.1, which requires nations party to the treaty to implement it in accordance with this principle,” the letter reads. “We know that, in the final March negotiating conference, your administration opposed a number of these treaty elements: we do not believe that your administration should now support them by signing the treaty.”

The letter also points out that “in Article 20.3, allows amendments by a three-quarters majority vote. We note that Article 20.4 makes it clear that amendments are binding only on those nations that accept them, but we do not regard this as an adequate safeguard.”

The vagueness of the treaty was also pointed out. “It defines none of the terms essential to interpreting or implementing it, or defines them only by reference to terms that are themselves undefined. This means that, by becoming party to the treaty, the United States would be accepting commitments that are inherently unclear.”

By being unclear, it would thus open the US to repeated charges of breach of faith, and no doubt it would also place pressure on the US to adopt new interpretations or amendments to the treaty.

Specifically the congressmen point out Article 7.1 (b)(i) and (ii) of the treaty, which requires nations party to the treaty to assess whether exports could be used to “commit or facilitate a serious violation of international humanitarian law,” or of “international human rights law.”

As for the violation of the “red line” set by the Obama administration, well they used former Secretary of State Hillary Clinton’s owns word to bolster their claim, citing Obama’s support for the negotiation of the treaty. Clinton stated in October of 2009:

“As long as that Conference operates under the rule of consensus decision-making needed to ensure that all countries can be held to standards that will actually improve the global situation by denying arms to those who would abuse them, the United States will actively support the negotiations. Consensus is needed to ensure the widest possible support for the Treaty and to avoid loopholes in the Treaty that can be exploited by those wishing to export arms irresponsibly.”

They further pressed Obama’s hypocrisy in the matter by stating “the State Department noted that consensus was necessary to provide “the opportunity to promote the same high standards for the entire international community.” But when the March 2013 negotiating conference failed to reach a consensus agreement, your administration supported the move to adopt the treaty through the U.N. General Assembly, where opponents and abstainers included many of the world’s most important and irresponsible arms importers and exporters, including Iran, North Korea, the People’s Republic of China, Russia, and Egypt.”

Therefore, the US didn’t even come close to ensuring “that all countries can be held to standards that will actually improve the global situation.”

Rep. Mike Kelly (R-PA) issued a statement regarding the letter he authored and submitted:

“As the signing period for the ATT gets underway next week, President Obama has an opportunity to take a monumental stand for our national sovereignty and our Constitutional rights. The ATT threatens both of these things and should be fully rejected.  Any treaty that would put the United States–the world’s defender of peace and freedom–on equal footing with the world’s worst dictatorships and terror-sponsors ought to be condemned, dismissed, and ultimately denied our country’s signature.  I sincerely hope the administration will listen to the very real objections my colleagues from both parties in Congress share and rightly decide that joining the ATT is not at all in America’s interest.”

Rep. Steve Stockman, who also signed the letter, said “The right to keep and bear arms is granted by God and protecting from government aggression by the Constitution.  It is not subject to the whims of global totalitarians massed in New York City. I oppose any UN treaty touching the right to keep and bear arms.  It’s beyond time for the United States to withdraw from the UN.”

I completely agree with his assessment. However, once a treaty is signed by a president, it normally remains available for the Senate to ratify. This treaty must not only not be ratified, but it must be completely removed off the table from any future ratification.