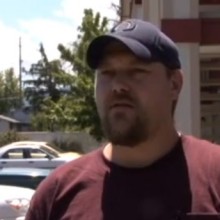 Corey Thompson, 36, a United States military veteran, discovered 40-year-old Johnathon Kinsella, a wanted felon, attempting to break into his home around 11:30pm on Sunday evening. He attempted to stop Kinsella by warning him verbally that he was armed and then providing a warning shot into the ground near him. Ultimately he stopped the intruder, but police didn’t think Kinsella made the right call and charged him with unlawful use of a weapon, menacing and reckless endangering. Then they confiscated his AR-15.

Police say 40 year-old Jonathon Kinsella, a wanted felon, was running. 36 year-old Corey Thompson told NewsWatch 12, he shot a warning shot at Kinsella because he was trying to break in through his back door.

“This is the end result. You break into someone’s house, there’s consequences,” explained Thompson.

Thompson says he grabbed his AR-15 assault rifle and told Kinsella to stop near his back door.

“When I’m dealt with a stressful situation, being a veteran from Iraq and the Afghanistan war, it’s natural. I just jump into combat mode. I told him I’m going to give you a warning shot,” said Thompson.

Medford, Oregon Police Lt. Mike Budreau takes a different stance saying, “There was nothing that the suspect was doing that was aggressive enough to justify the shooting. In fact, the suspect was walking away.”

Well he wasn’t walking away when he was trying to break in the man’s home, was he? Nothing aggressive enough, eh Lt. Budreau? Attempting to break into someone’s home in the middle of the night is not considered aggressive by you? It’s referred to as burglary. It’s aggressive enough that even the Bible says the person who kills another who is committing burglary is not guilty.

Notice the first thief is a burglar, a nocturnal thief, and the second is a daytime thief.

“I can see where they’re coming from, with those kinds of ordinances and stuff. I understand yes, I did discharge my weapon but I was careful not to fire it at any body’s residence. It was at the ground specifically,” explained Thompson.

Lt. Budreau attempted to justify charging Thompson by saying that bullets fired from semi-automatic rifles “just don’t hit something and absorb. Especially if it’s something with that high velocity. It could skip off of objects and wind up going into a house, through a wall, through a window.”

However, the problem is that if “ifs and buts were candies and nuts, we’d all have a Merry Christmas.” No one was harmed. The bullet didn’t go anywhere but in the ground. It didn’t skip. It didn’t enter another house. One would think the police in this case would use a bit of common sense and politely thank Mr. Thompson for aiding in the capture of a wanted felon. In other words, once again, just like in Boston following the bombing, a citizen is the one that actually finds the wanted person and aids in their capture.

Police confiscated Thompson’s weapon claiming that it was used in the commission of a crime, which honestly is laughable. It was used defending his home! Should Thompson be found not guilty, he will get his firearm back. I hope a jury of his peers has more common sense than Lt. Budreau and his officers.

The police in Medford are dealing with gangs and have recently been on the lookout for a stabbing suspect. They’ve even recently made arrests in slew of break ins, so again I reiterate that they were not around to protect Mr. Thompson and I think he did what any man would have done, though I hasten to say that many of us where I live would not have given a warning shot. A few honest citizens removing these criminals from the planet when they attempt to commit these crimes would be in the best interest of everyone.

Feel free to be a voice to the Medford, Oregon Police Department on behalf of Corey Thompson: