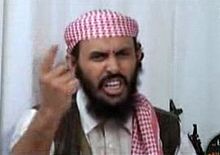 Al-Qaeda leaders have been up to their normal rhetoric lately. It was reported late last week that Al Qaeda’s Inspire Magazine praised both the Boston and London attacks. This is the same magazine that published the blueprints for making pressure cooker bombs back in 2010.  Now an Al-Qaeda leader from Yemen has let loose on Americans in the French Press:

Al-Qaeda’s military chief in Yemen warned Americans in an audio message posted online Sunday that the Boston bombings revealed a fragile security as he urged Muslims to defend their religion.

Qassim al-Rimi, the military chief of Al-Qaeda in the Arabian Peninsula, said making bombs such as the ones used in the twin blasts in Boston in April, is within “everyone’s reach”.

“The Boston events… and the poisoned letters (sent to the White House), regardless of who is behind them, show that your security is no longer under control, and that attacks on you have taken off and cannot be stopped,” he said, in the message entitled: “A letter to the American people.”

“Every day you will be hit by the unexpected and your leaders will not be able to defend you,” warned the man whose organisation is considered by Washington the world’s most dangerous Al-Qaeda branch.

Rimi said the killing of Al-Qaeda’s founder Osama bin Laden in May 2011 and top Yemeni-American cleric Anwar al-Awlaki in September 2011, had not ended the struggle.

“Have you eliminated the jihadist groups that have spread everywhere after they had only been in Afghanistan? Today, they are in your land or close to it,” he warned.

To the Muslims in the United States, he said: “We encourage you to carry on with this way, be steadfast in your religion.

“Carry out your obligations, defend your religion and follow in the footsteps of those who supported their religion and Ummah (Muslim nation) while they are in their enemy’s den,” he said.

Al-Rimi goes by various aliases and is believed to be an Al-Qaeda military commander.  He has been accused by the Yemeni government of running an Al-Qaeda training camp in the  Abyan province. He has been a target of U.S. cruise missiles and Al-Qaeda raids by his own government. He was also added to Saudi Arabia’s list of most wanted terrorists in 2009.

His death has been reported multiple times but none of the reports were ever confirmed. Qassim Al-Rimi is a bad man who is currently spreading propaganda in the wake of two horrible tragedies. Some will be intimidated by his words but unfortunately others will be inspired.

These leaders is that they are quick to order young men and women to their deaths. They cite that it will bring them to Allah. If they truly believed that you would think they would have bombs strapped to their chest while leading the charge.

Politics are much the same wherever you go. When you understand that leaders are always looking for ways to take advantage of tragedies, you will understand the order of the world. We all know that another attack will come. Hopefully it is in the distant future but we know that as long as there is Islam in America that there will be another attack. Qassim Al-Rimi does not have to call for such an attack for it to happen. There are plenty of hate-filled leaders with big mouths who will call for that even after Al-Rimi is gone.

Someday Qassim Al-Rimi might find that his 72 virgins are actually frigid whores, but at least the flames of hell will keep him warm.