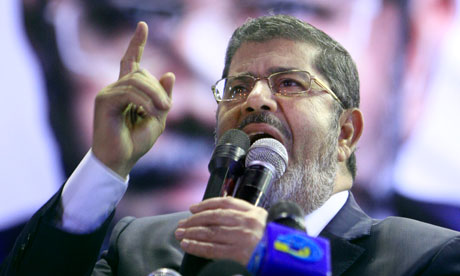 On Friday Cynthia Farahat, reporting for Frontpage Mag, offered a new wrinkle in the Benghazi story line. She raised a legitimate question from examination of a YouTube video. Farahat alleges that one of the terrorists referenced Morsi by saying, “Don’t shoot. Don’t shoot. Dr. Morsi sent us.” Her contention is that this was said in an Egyptian dialect of Arabic. I do not speak much Arabic and I certainly do not know anything about the different dialects. With that said I think this is an interesting possibility and I want to share this with our readers. Here is an excerpt from Farahat’s article:

The terrorist attack in Benghazi is far more disturbing than previously thought. Although it has not been reported in the U.S. media, the possibility exists that the Egyptian government may have played an operational role in the attack. YouTube videos of the terrorist strike raise a serious problem that only an Arabic speaker would detect: some of the terrorists are speaking in the Egyptian dialect of the Arabic language.

Indeed, one of the videos shot with a cell phone of one of the attackers emerged around the time four Americans were killed. It shows a mob approaching the American compound under siege, clearly telling the terrorists in the dialect of Upper Egypt: “Mahadesh, mahadesh yermi, Dr. Morsi ba`atna” —which translates to: “Don’t shoot, don’t shoot, Dr. Morsi sent us.”

“Dr. Morsi” refers, of course, to president Mohamed Morsi of Egypt. The name Morsi is Egyptian and does not exist in any other Arabic speaking country.

The Egyptian regime’s connection to Benghazi also helps explain why it denied U.S. the ability to interrogate Abo Ahmed, an Egyptian suspect in the terrorist attack.

According to a Fox News report, Abo Ahmed had contacted Al-Qaeda leader Ayman Al-Zawahiri in late 2012, asking to establish a base in Libya “to take advantage of the conditions in Libya after the revolution in order to buy weapons and attract foreign fighters.”

Again I must note that without being fluent in Arabic and certain dialects I can not verify the story. I do think it is fair to say that many of us have entertained this idea already.

As the United States sent $250 million, F-16 fighter jets and Abrams tanks to Egypt there has been a lot of scrutiny here in America. This country is known for wide scale persecution of Coptic Christians and the American Embassy in Cairo was also attacked on the same day as the American Diplomatic Mission in Benghazi, Libya. It is no secret that many Egyptian people do not think highly of Americans. Whether this YouTube video and the translation are correct, or not, I think there are legitimate questions about who may have been the driving force behind the Benghazi attack. It’s not like we’d have to search hard to find a long list of those with motives. Hatred is a powerful motivator.

My personal opinion is that Morsi accepts aid from the United States without gratitude. Much like American Muslims are sometimes encouraged to milk the welfare system here, there is a proud tradition in Islam of making “infidels” pay for their transgressions. By that I mean that they expect payment in cash. I am not the foremost expert on Islam so take this for what it’s worth but my feeling is that the relationship between the United States and Egypt is somewhat like a mafia group who is getting paid “protection money.” There is no gratitude for the assistance. We are basically paying them not to kill us. They feel that we owe them as much.

But who’s to say they didn’t have a little fun just this once?

That may be a sick way of wording it but that’s exactly the way I see it. At any rate my opinion does not matter in the least but you should definitely follow the link to finish the article about Morsi’s role. The woman who wrote it is described as an Egyptian Political Activist and claims that questions of Morsi’s involvement have been asked repeatedly in the Egyptian media with no answers.

Based on the reputation of our own mainstream media that would not surprise me if it were proven true. We would not want to discredit the precious Muslim Brotherhood. Would we? Obama wouldn’t stand for that. If his people read this they will probably arrest me.