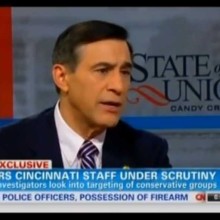 Darrell Issa (R-CA), Chairman of the House Oversight and Government Reform Committee, brought to light new testimony from Internal Revenue Service (IRS) employees on Sunday. On CNN’s State of the Union Issa pointed out the that the Obama administration’s claim about “a few rogue agents” being the ones guilty of targeting political enemies is patently false and his committee provided transcriptions, in which a Cincinnati IRS employee was clear in stating that they were ordered by Washington, D.C. personnel to heavily scrutinize Tea Party groups. After providing transcripts, Issa gestured towards the image of White House Press Secretary Jay Carney and called him a “paid liar.”

[youtube]http://youtu.be/GOJO2jnDcTQ[/youtube]
“As late as last week the administration’s still trying to say there’s a few rogue agents in Cincinnati when in fact the indication is they were directly being ordered from Washington,” Issa told Candy Crowley on CNN’s “State of the Union.”

Issa’s committee provided CNN partial transcripts of its interviews with Cincinnati IRS agents. Crowley read from one transcript in which an investigator asked an agent if directions for extra Tea Party scrutiny had emanated from Washington. “I believe so,” the agent said. Here’s a partial of the transcript:

Q: In early 2010, was there a time when you became aware of applications that referenced Tea Party or other conservative groups?

Q: Okay.  Now, was there a point around this time period when [your supervisor] asked you to do a search for similar applications?

Q: To the best of your recollection, when was this request made?

Q: Did [your supervisor] give you any indication of the need for the search, any more context?

A: He told me that Washington, D.C., wanted some cases.

Q:  How many were held there?

Q: So you prepared seven hard copy versions of the applications to go to Washington, D.C.?

Q: Did he give you any sort of indication as to why he requested you to do that?

A: He said Washington, D.C. wanted seven.  Because at one point I believe I heard they were thinking 10, but it came down to seven.  I said okay, seven.

Q: How did you decide which seven were sent?

A: Just the first seven.

Q: The first seven to come into the system?

Q: Did anyone else ever make a request that you send any cases to Washington?

Q: When was this, what time frame?

Q: But just to be clear, she told you the specific names of these applicants.

Q: And she told you that Washington, D.C. had requested these two specific applications be sent to D.C.

Q: Okay.  So she asked you to send particular parts of these applications.

Q: And that was unusual.  Did you say that?

A:  It’s impossible.  As an agent we are controlled by many, many people.  We have to submit many, many reports.  So the chance of two agents being rogue and doing things like that could never happen.

A: Well, it’s hard to answer the question because in my mind I still hear people saying we were low-level employees, so we were lower than dirt, according to people in D.C.  So, take it for what it is.  They were basically throwing us underneath the bus.

Q: So is it your perspective that ultimately the responsible parties for the decisions that were reported by the IG are not in the Cincinnati office?

A: I don’t know how to answer that question.  I mean, from an agent standpoint, we didn’t do anything wrong.  We followed directions based on other people telling us what to do.

Q: And you ultimately followed directions from Washington; is that correct?

A: If direction had come down from Washington, yes.

Q: But with respect to the particular scrutiny that was given to Tea Party applications, those directions emanated from Washington; is that right?

There was another senior IRS Cincinnati employee complained about micromanagement from D.C.:

Q: But you specifically recall that the BOLO terms included “Tea Party?”

A: That is correct.

Q: Was it your understanding that the purpose of the BOLO was to identify conservative groups?

Q: Was it your understanding that the purpose of the BOLO was to identify Republican groups?

Q: Earlier I believe you informed us that the primary reason for applying for another job in July [2010] was because of the micromanagement from [Washington, DC, IRS Attorney], is that correct?

Q: Why didn’t you want to be associated with it?

A: For what happened now.  I mean, rogue agent?  Even though I was taking all my direction from EO Technical [Washington, D.C], I didn’t want my name in the paper for being this rogue agent for a project I had no control over.

Q: Did you think there was something inappropriate about what was happening in 2010?

A: Yes.  The inappropriateness was not processing these applications fairly and timely.

Q: You have stated you had concerns with the fairness and the timeliness of the application process.  Did you have concerns with just the fact that these cases were grouped together and you were the only one handling them?

A: I was the only one handling the Tea Party’s, that is correct.

Q: Did that specifically cause you concern?

A: Yes, it did.  And I was the only person handling them.

Q:  Were you concerned that you didn’t have the capacity to process all of the applications in a timely manner?

A: That is correct.  And it is just – I mean, like you brought up, the micromanagement, the fact that the topic was just weirdly handled was a huge concern to me.

Crowley, whose credibility is questionable at best after the entire Obama/Benghazi terrorism fiasco during the 2012 Presidential debates, was not convinced that these transcriptions were “definitive.”

“That one isn’t,” Issa said. “But I will tell you, one of the agents asked for and got a transfer because that person was so uncomfortable that they wanted out of it.”

Issa’s committee will be releasing the full transcripts in the future. However, he said that he was not a liar like White House Press Secretary Jay Carney. In fact, Issa gestured to an image of Carney behind Crowley and said, “Their paid liar, their spokesperson — picture behind — he’s still making up things about what happens and calling this a local rogue.”

The House Oversight Committee will be holding hearings this week which will focus on the Treasury Inspector General for Tax Administration report on excessive IRS conference spending and abuses of taxpayer money. Between 2010 and 2012, the IRS spent $50 million on at least 220 conferences.

Meanwhile, NBC is reporting that twenty-five conservative and Tea Party groups have filed lawsuits against the IRS, Attorney General Eric Holder and other top IRS officials “alleging that the Obama administration unlawfully targeted the groups because of their political beliefs and obstructed their applications for tax-exempt status.”