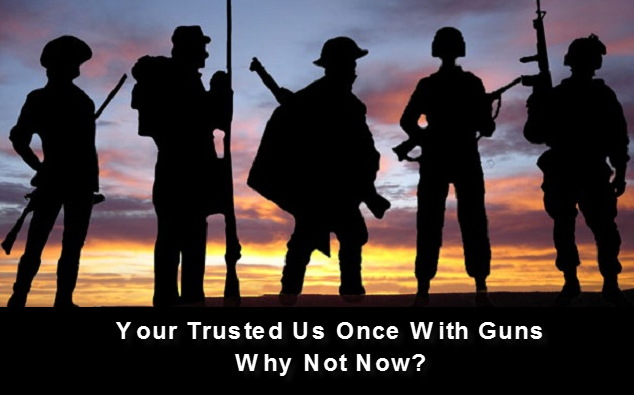 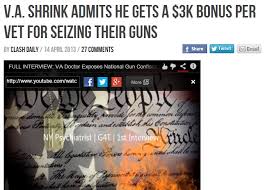 Why are letters from the VA being sent now to military veterans stripping them of their 2nd Amendment rights? It is being sent by the U.S. Department of Veterans Affairs to many of America’s heroes. The letter doesn’t offer any details about the reasons behind the proposed finding of the veteran’s incompetency.

Janet Napolitano, the President’s chosen leader of DHS, has already notified law enforcement that the group of people to be most feared are America’s veterans. She justifies this assertion because of their incidents of PTSD and other mental health issues that they suffer from. “Since the mid 1990s approximately 160,000 veterans have lost their guns,” said Michael Hammond, the legislative counsel for Gun Owners of America. Sooner or later, everyone who has ever been diagnosed with depression will also be disarmed if this precedent is permitted to keep going on.

The Letter They Receive

This letter states, “A determination of incompetency will prohibit you from purchasing, possessing, receiving, or transporting a firearm or ammunition. If you knowingly violate any of these prohibitions, you may be fined, imprisoned, or both pursuant to the Brady Handgun Violence Prevention Act, Pub.L.No. 103-159, as implemented at 18, United States Code 924(a)(2)”. It furthermore expresses that they will be declared mentally incompetent and stripped of their Second Amendment rights unless they are able to prove that they are competent to some unnamed people. The letters notify the recipients that they need to produce evidence to the contrary within 60 days. If the veteran prefers a hearing, they must inform the VA within thirty days. This procedure is definitely now one where veterans are “guilty until proven innocent”.

Whenever veterans go to the VA for medical services, a psychiatrist has the authority to rule that they are incompetent and assign a fiduciary to manage their affairs. Because of this psychiatrist’s report, their firearms could be confiscated. Part of the problem is that a monetary value has been placed on a diagnosis of a mental health problem. The more deranged they are diagnosed to be, the more money the VA would make. VA doctors are now reportedly getting a $3000 bonus for each veteran when their guns that are confiscated.

The Fifth Amendment to the U.S. Constitution declares that no person shall “… be deprived of life, liberty, or property without due process of law… “. In every state in our country, no one may be declared incompetent to execute their own affairs without due process of law. A judicial hearing is required with evidence being offered to demonstrate to a judge that a person is definitely incompetent.

The United States Justice Foundation is trying to uncover the truth regarding this issue by submitting a Freedom of Information Act request to the Department of Veterans Affairs. The USJF wants to force them to disclose the criteria that they are using to enter veterans onto the background check list that will stop them from exercising their Second Amendment rights.

The Increase of Drug Use by the Military

Even before the Iraq war, soldiers were not permitted to go into combat on psychiatric drugs. Ten or Twelve years ago you couldn’t even get into the armed services if you ever utilized these kinds of drugs. There has been close to $2 billion spent on psychiatric drugs in our military since 2001. Troops are sent out on deployment typically with a supply of 180 days of these medications. Is this trend purposely being applied so that the government can have an excuse for their gun confiscation?

David Bellavia, a Silver Star recipient for his heroism at Fallujah, Iraq who served with the 1st Infantry Division’s 2nd Battalion of the 2nd Infantry Regiment, exclaimed it was common place for soldiers in the combat zone to be treated with psychotropic drugs. “Medication was handed out like candy,” he said. “If the medication was so dilapidating there would be scores of violence between the soldiers, when there is not.”

Bellavia also revealed that at the end of their tour of duty, combat soldiers are forced to go through a psychotherapist examination. He said some of the questions posed by the evaluator included: “Have you seen a dead body?”, “Did you feel your life was at risk?” and “Did you see blood?”. He went on to say, “If a soldier answers ‘yes’ to any of these questions, they are automatically targeted for a mental health condition”.

You will discover a correlation between the growing number of suicides in the armed forces and the fact that more than 110,000 active-duty Army troops are taking prescription antidepressants, narcotics, sedatives, anti-psychotics and anti-anxiety prescriptions. According to Peter Breggin, a New York psychiatrist, several troops are now even reporting that their psychiatrist won’t approve their deployment unless they use psychiatric drugs!

There definitely appears to be an effort to push these kinds of drugs into the military. The current Army psychiatrist’s deployment kit may likely contain 9 kinds of antidepressants, benzodiazepines for anxiety, four anti-psychotics, 2 different sleep aids and a few varieties of drugs for attention-deficit hyperactivity disorder as reported by a 2007 article in the Journal of Military Medicine.

The globalist rich elite don’t want any weapons in the hands of experienced combat veterans whenever push comes to shove in our country at some ï»¿time in the coming years. So they just keep pushing drugs on them and financially backing policies to confiscate their guns. It is about time that we stand against the abuses which are being forced down our throats before it is too late.

Robert Bradshaw is also a student of Biblical Research and has focused recently on crucial issues in our society today that people must become more aware of so that they don’t stumble in their path to success.