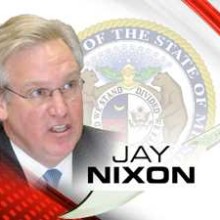 Nixon is a typical Democrat — usurping the will of the people and lying about why. Nixon said, “this bill could jeopardize a family’s ability to adopt children from other countries.” Bald-faced lie. There was “nothing in the bill that would endanger foreign adoptions.” Who got to Nixon? What do they have on this tool? His campaign coffer$ should be examined.

The original bill passed the Senate 24-9, which is one vote more than needed for a veto override. It passed the House 109-41, which is the exact number of “yes” votes needed. The bill’s sponsor, Sen. Brian Nieves, R-Washington, would consider whether to seek a veto override.

No media mentions that the traitor is a Democrat.

ST. LOUIS–(KMOX)–ST. LOUIS • Gov. Jay Nixon vetoed on Monday an anti-”Sharia Law” bill, saying that in its zeal to address an imaginary problem, the legislation creates a real one for parents seeking foreign adoptions.

The bill would make it illegal for Missouri to enforce any foreign law or legal decision deemed “repugnant or inconsistent” with Missouri or U.S. law. It doesn’t specify Islamist Sharia religious law, but it’s part of a movement by conservative lawmakers in more than 20 states who have pushed similar measures to highlight alleged Sharia influences in the U.S.

“There are certainly problems facing our state and nation, but this isn’t one of them,” said Nixon, speaking to families at Lutheran Family and Children’s Services, a major adoption proponent. The bill, he said, could muck up the works for families attempting to adopt through foreign governments: “The laws passed in Jefferson City have real consequences. This bill could jeopardize a family’s ability to adopt children from other countries.”

The bill’s sponsor, Sen. Brian Nieves, R-Washington, scoffed at that explanation for the veto, saying there was nothing in the bill that would have endangered foreign adoptions.

“If he would have said the bill might cause an invasion of flying armadillos, that would have been just as valid,” said Nieves. He alleged that Nixon had a different motive but said he didn’t know what it was. “I think the governor owes it to the people of Missouri to come clean” about his reasoning for the veto, said Nieves.

Nixon’s written veto message says the bill “seeks to introduce a solution to a problem that does not exist and, in so doing, puts in jeopardy some of the very liberties that the bill purports to protect.” The statement further warns that the bill, if signed into law, could create “a chilling effect” on international adoptions by Missouri families and “could invite retaliatory action by a foreign country by denying all adoptions to Missourians.”

Nixon’s office cited data showing that, between 1999 and 2011, Missourians adopted more than 5,850 children born outside the U.S.

The original bill passed the Senate 24-9, which is one vote more than needed for a veto override. It passed the House 109-41, which is the exact number of “yes” votes needed.

Nieves said he would consider whether to seek a veto override. If he doesn’t, he said, he would plan to re-introduce the bill in the future with language specifying that it won’t affect foreign adoptions.

At a committee hearing on the bill in March, Nieves acknowledged that Missouri isn’t in immediate danger of being overtaken by foreign legal theories, saying, “Missouri’s been pretty fortunate as far as this goes.” But he said he wanted to make sure the state “keeps things the way they are.”

Pamela Geller is the Publisher of Atlas Shrugs and a regular contributor to The D.C. Clothesline.