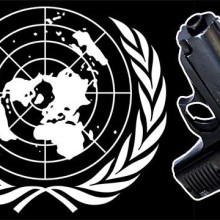 Instead of taking the opportunity to sign the United Nations Small Arms Treaty on Tuesday, the White House has indicated that Barack Obama will sign it sometime before the end of August. This causes some concern as to what type of event the White House is waiting on to exploit the emotions of Americans to gain support for the measure and put pressure on the Senate to ratify it. Many have suggested that the signature will come under cover of darkness, sometime in August, When Congress will not be in town.

Press Secretary Jay Carney said that Obama aims to sign the treaty “before the end of August.” Tuesday was the earliest he could have signed it.

“We believe it’s in the interest of the United States,” he said. “While we look forward to signing the treaty, there are remaining translation issues that need to be resolved.”

The Hill points out,

The National Rifle Association (NRA) opposes the treaty, and the delay would allow Obama to sign the pact during the August doldrums, with Congress out of town.

That time frame appears to validate the concerns of treaty advocates who had worried the administration would wait until the cover of darkness to sign a treaty opposed by a majority of senators.

Rachel Stohl, a senior associate with the Stimson Center, which supports the treaty, said “I think there’s a lot of political hand-wringing going on. They know people are going to be paying attention to this particular issue on this particular day.”

Secretary of State John Kerry released a statement on Monday in which he said the US “welcomes the opening of the Arms Trade Treaty for signature.” He also said that as soon as the process of conforming the official translations is completed satisfactorily, Obama would be looking forward to signing it.

So there needs to be conforming official translations and that, completed satisfactorily. Sounds similar to being ready to sign something that you have no idea what it really says. Obamacare, anyone? Seems like that is the case on an international scale where the treaty has already passed overwhelmingly.

Kerry went on to state:

“The Treaty is an important contribution to efforts to stem the illicit trade in conventional weapons, which fuels conflict, empowers violent extremists, and contributes to violations of human rights. The Treaty will require the parties to implement strict controls, of the kind the United States already has in place, on the international transfer of conventional arms to prevent their diversion and misuse and create greater international cooperation against black market arms merchants. The ATT will not undermine the legitimate international trade in conventional weapons, interfere with national sovereignty, or infringe on the rights of American citizens, including our Second Amendment rights.

We commend the Presidents of the two UN negotiating conferences – Roberto Garcia Moritan of Argentina and Peter Woolcott of Australia –for their leadership in bringing this agreement to fruition. We also congratulate all the states that helped achieve an effective, implementable Treaty that will reduce the risk that international transfers of conventional arms will be used to carry out the world’s worst crimes.”

The Senate has already signed a resolution to not ratify the treaty thanks to the work of men like Senator Mike Lee (R-UT). Also, 130 members of Congress recently sent a letter to both Obama and Kerry opposing the treaty, writing “We strongly encourage your administration to recognize its textual, inherent and procedural flaws, to uphold our country’s constitutional protections of civilian firearms owners, and to defend the sovereignty of the United States, and thus to decide not to sign this treaty.”

The treaty, while be touted by liberals as something that stops guns from falling into the hands of terrorists, is deeply flawed, leaves open the possibility of changes or different interpretations that would only put a stranglehold on the United States. Furthermore, the treaty will have no effect upon governments, such as the Obama administration, that openly and knowingly provide weapons to drug cartels and negotiates support, along with RINOs in the Senate (not mentioning any names here, but at least one’s initials are John McCain (R-AZ)), with enemies of America to arm them.

Ultimately, no matter what we are told by the politicians, it is an attack upon freedom; a freedom we may just have to one day use to stop the growing tyranny.

One other thing to keep in mind. Iran is also one of the countries that the United Nations installed to help police the treaty. Noticeably missing from oversight on the treaty is the United States.

There is not a question of whether Barack Obama will sign the treaty, only when. Timing is key for him and he demonstrated that by putting his support behind the treaty once again within hours of his re-election.

Let’s keep getting the word out that not only should this treaty be opposed, but should be completely removed from the table of consideration so that it cannot be snuck through in a future Congress.