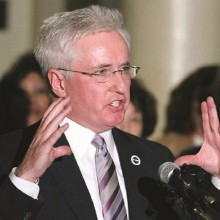 Yesterday 16,000 signatures were delivered to recall Colorado State Senator John Morse. Morse has been a huge backer of the sweeping and numerous gun control bills that were passed in Colorado earlier in the year and signed into law by Governor John Hickenlooper. Below is just a reminder of Mr. Morse’s thinking, or lack of thinking, as he spoke about massive gun control laws as though they would “stop bullets piercing children’s bodies.”

According to opponents of the Democrat Senate President, they turned in twice as many signatures as needed on Monday.

Bill Adaska, a retired engineer from Denver who volunteered to gather the signatures for Morse’s signature in his district, said “This shot will be heard around the world. This is the race, right here, that’s going to show Washington and Chicago that when you come after our guns, we’re going to take you out.”

The Washington Post reports on Morse and his response to the recall:

Morse backed the gun control measures, and sponsored an even stricter measure to gun owners liable in some cases for damage caused by their weapons. Morse scuttled that liability measure when it appeared it didn’t have enough support to clear the Senate.

A defiant Morse responded Monday to the recall petition by insisting he won’t resign and that national gun groups have targeted him in an effort to scare politicians nationwide away from addressing gun control.

“This turns into a national race,” Morse predicted.

Even if he loses his seat, Morse said, the gun measures were too important not to adopt after a bloody 2012. He insisted that he’s never aspired to another office and wouldn’t mind losing his political career over the gun bills.

Perhaps Morse should be concerned with protecting Coloradans from politicians who don’t uphold their oath and are tyrannical while at the same time respond emotionally to an issue rather than intellectually.

The National Rifle Association (NRA) sent out political mailers in support of Morse’s recall, but the effort was a result of grassroots efforts, not the NRA.

No state lawmaker has ever faced a recall vote in Colorado history. Accordingly, voters would determine whether he should be recalled and who would replace him.

Any proposed candidate to take Morse’s place would only need 1,000 signatures.

There are more efforts to oust Democrat lawmakers. Senator Angela Giron of Pueblo has signatures for her recall due next week.

Two other Democrat lawmakers who were targeted for recall appear to be safe as the efforts to recall them seem to not have enough support to bring their recall to a vote.

The next step in the Morse case is that the Colorado Secretary of State has 15 business days to verify the signatures. Morse could challenge the signatures before a recall election is set. The latest date that for a recall vote of Morse would be early October.

Way to go Colorado! If lawmakers aren’t obeying the law, start kicking them out. That, my friends is a means to a peaceful revolution.