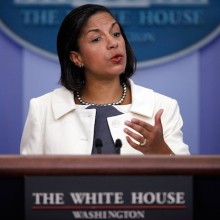 As predicted last month, by our friend Tim Brown, Susan Rice has been named the White House National Security Adviser. There has been a ton of outrage already and more should be expected. Why wouldn’t conservatives be angry about the appointment of a woman who misled us about Benghazi?

Senator Rand Paul expressed his disappointment in an interview with Fox News stating, “I  think the president is struggling to regain the moral authority to lead the nation and this doesn’t really encourage anyone to reappoint or to promote basically the person who is guilty of misleading us over the Benghazi tragedy.”

“I am sure she is a nice person, but she lacks judgment. She claims to have read the daily intelligence brief, and anyone who was following what was happening in Libya would have known terrorism was likely a factor in the incident in Benghazi.”

Politicians like Chaffetz have to choose their words carefully. I don’t. Susan Rice had to know. They all knew. She was promoted simply because she has shown that she is willing to play the political game and the American Public is not stupid. Susan Rice is a liar.

The liars stick together. It’s an “honor amongst thieves” thing. As reported by Tim Brown in The D.C. Clothesline article back in May, even Mr. Ben Rhodes is in full support. Oh yes, this would be the same Ben Rhodes who has been pinpointed as the mastermind behind the Benghazi talking points. The May 17th article stated:

Ironically, Ben Rhodes, spokesman for the National Security Council said, “I think that Susan always maintains close relations with the president and his national security team, and that continues to be the case. If anything, the way she handled the Benghazi situation — and then the withdrawal — only enhanced her relations here, because she did so with grace and good humor.”

Are you kidding me? “Grace and good humor?” Is that what we call “lying through our teeth” these days?

The American people deserve better and only the most brainwashed Obama-ites will not see through this. Obama is flipping the bird at conservatives, as we speak, and he loves it.

My late Mother always taught me that honesty is the best policy. Thank God my Mama never had to witness The Obama Administration.

Liars are encouraged in this administration. Why? Because you never know when you might need to find someone like Eric Holder to throw under the bus. Mr. Holder is no saint but we all know who is making the calls. It’s the egomaniac in the Oval Office. He might have to make an example of Susan Rice someday if he finds it convenient.