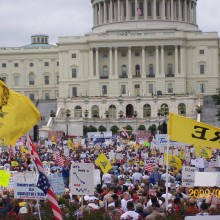 The hypocrisy of the Capitol police is truly astounding. While they didn’t need to check out certain other events such

as the planned, and now backed-off of, Armed March by Adam Kokesh or the Occupy movement, they have determined that those in the Tea Party have to let them see their websites and social media and jump through all sorts of ridiculous hoops to exercise their First Amendment right to peaceful assembly, free speech and to petition their government for a redress of grievances. The process of permit approval should be taking days, but it’s taking weeks and still there is no approval. Obviously these are issues that are quite relevant given the current scandal where the government has targeted Tea Party groups for harassment, don’t you think?

According to the Gateway Pundit, Kevin Mooneyhan from the Tea Party Patriots laid out a timeline of things the Capitol police are demanding of them for their June 19, 2013 rally. They began by submitting their permit on May 22, 2013 via fax.

They were then contacted by an “Officer Brown” the following day to ask if they would be having a banner and what the dimensions would be and how it would be displayed.

Additionally, they were told they would have to coordinate with Union Station for buses, since the Capitol could not accommodate buses.

Mooneyhan indicated that from his conversation with the officer that the permit would only take a couple of days to approve. He was wrong.

A week later, he touched base with Officer Brown to see if the permit had been approved. She informed him that it “had been submitted upstairs for approval” and didn’t have a time frame on when the approval would come. However, she did indicate that the permit had to be signed off by three sergeants.

Mooneyhan reached out to Congressional offices on June 4 to see if elected representatives would be able to speed up the process. However, though they claimed to have made attempts, Capitol Police would not speak to them since they were not the party that submitted the permit application.

He then was contacted by Jerry Bell on the same day, who is a crime analyst with the Capitol Police. Here are the questions and answers that Bell asked and that Mooneyhan gave:

** Is the purpose of your event to promote government accountability?
My answer was yes. This was also indicated on the application
** Have you ever had an event on Capitol grounds before? If so, when was the last one?
My answer was yes and March of 2012.
** Have you ever had any opposition to your cause show up at these events in the past?
My answer – possibly. If there was any opposition it was a small amount. Nothing ever escalated beyond civil conversation.
** Do you know of any opposition that will be at your June 19th event?
My answer – not at this time because we haven’t publicized the event yet because we wanted to make sure we secured the permit first.
** Have you invited any members of Congress to the June 19th event?
My answer – I have informed some Members of Congress, but official invites have not been extended because we are waiting for approval of the permit.
** Does your organization have any social media sites like Twitter or Instagram? I know that you have a Facebook page.
My response – yes we do, but I’m not sure why this is relevant to the application.

Following the conversation, Mooneyhan was asked to submit a timeline in writing to Bell because of the dragging out of the approval process. Later that day, Officer Brown called him back up to indicate that she saw no reason why the permit would not be approved, but it had not been signed off on. She told Mooneyhan that he could go ahead and send out invitations to his rally.

He also pointed out the writing on the permit in the “timeliness of Application” section, which reads:

“Applications must be submitted at least one hundred twenty (120) hours, or five (5) days, in advance of the activity to guarantee processing. Applications will be accepted up to one (1) year in advance. Additionally, demonstration applications must satisfy all requirements stated herein before processing can be completed; therefore it is imperative that the spokesperson responds promptly to all queries from the Special Events Coordinator.”

So in all fairness, by the permit’s own standards, it should have taken no more than five days to process. So far nothing.

Finally, the Tea Party Patriots have also submitted another permit application for an event in D.C. on October 12, 2013. They submitted this permit application on April 29, 2013, nearly a month before the permit above. They confirmed with Officer Nichols of the Capitol Police they had received it and yet, they have not received approval or heard anything in five weeks.

Perhaps they need to hear a few more voices on this issue.

The best avenue for voicing concern over this matter can be obtained here: