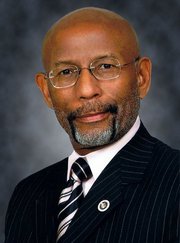 Last Friday Elbert Lee Guillory made news by switching political affiliations from Democrat to Republican. The switch officially made him the first Black GOP Senator in Louisiana since the Reconstruction Era. Guillory continually referred to Democrats as the “party of disappointment” in his remarks made Friday at the @Large Conference in Baton Rouge, LA.

Guillory, an attorney from Louisiana’s 24th District in Opelousas, was at the conference to accept The Frederick Douglass Award. The Senator stated, “I am as of this day joining Frederick Douglass as a Republican.” Guillory cited a number of reasons for leaving the “party of disappointment.” Here are some brief excerpts from his remarks:

One of the biggest disappointments has been breakdown of American families. Their policies have encouraged the high teen birthrate, high school drop outrates, high unemployment.Children are encouraged to get the crazy check instead of honkering down to get an education.

Minority unemployment is in the stratosphere.

I want better for my country and Louisiana. We must help America find her path home. The people in this room today seek an alternative solution to these problems of America. We have received some pretty good deals under the Republican Party. Republicans helped LBJ pass the Civil Rights Act over the OBJECTIONS of most Democrats. President Nixon left Vietnam and brought the money home and invested in America; Obama hasn’t done anything like that.

I pledged my dues, and I look forward to creating new partnerships in the State of Louisiana. I am of this day joining Frederick Douglass as a Republican.

He brought up many key issues on which he could no longer agree with Democrats including things like abortion, Obamacare, Benghazi, immigration and unemployment.

From the outside looking in this would seem to be a huge story. It seems to be the story of a Black Louisiana Senator who has finally seen the error of his ways and joined the Republican party. The truth is that if that were in fact the case this story would have received much more play over the last week. It has not. Why is that?

It’s because the major conservative sites, who have reported it, are only telling part of the story. Many are avoiding the story and there is a reason. Others are playing the same spin game that the left is known for. I can’t do that. I am a conservative but I am also a truth seeker.

The media, left and right, are counting on our ignorance to paint this man as a hero of the right or a traitor to the left. The truth is that he was considered a “Conservative Democrat” already and that a switch in parties was really not that surprising. But some conservative media outlets are trying to use the color of Guillory’s skin to make this a feel-good story. There is more. Much more…

It was not surprising at all considering that prior to 2007 Guillory was a Republican. Yes I could have stopped writing a few paragraphs ago and everyone would be happy thinking that we had scored one for the good guys, but I can not do that when I know what I know. Let’s check out what our friends at Wikipedia have to say about Elbert Lee Guillory:

Guillory has a conservative political philosophy. He was a Republican prior to 2007 when he changed from Republican to Democrat before successfully seeking election from a heavily Democratic district in the Louisiana House of Representatives.[8]

Oh yeah. Did big conservative news sources forget to mention that? Look, I am a one man show and a small time blogger. I can’t avoid making mistakes sometimes because I am human. It is possible that the big boys with their staffs of professional journalists might have missed this part but I tend to question that. Those that did report this story left out this key fact and many of the big conservative sites just failed to report it at all. Now we know why.

The fact is that Elbert Guillory was potentially a Republican plant and at best a two-time turncoat who can not make up his mind. As the political winds change he could switch again.

I realize that being a Black Republican can automatically endear you to a large number of right-wing voters. I also understand that the color of a man’s skin has nothing to do with what rests inside of him. Elbert Guillory may be a good and decent man but he obviously does not carry the conviction of Frederick Douglass.

I think it is important for Americans to understand that both sides are guilty when it comes to trying to put their people behind enemy lines. With that said, if I lived in his district I would have a very hard time voting for him despite the my right-leaning tendencies. This man has changed political parties twice now and who is to say he won’t change again?

Elberty Guillory is no Frederick Douglass. He is just a man who might have made headlines, but there is always a story behind the story. The truth must come out.