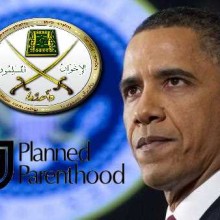 “These rituals remind us of the principles that we hold in common, and Islam’s role in advancing justice, progress, tolerance and the dignity of all human beings.”

As we all know, Barack Hussein Obama parades around as a self-proclaimed champion of “women’s rights.” In truth, he advocates the most dangerous and destructive measures a woman can face through two fronts: promoting abortion and radical Islam, both of which are destructive to life, liberty and the pursuit of happiness.

Obama will be touring the United States for a Muslim Outreach initiative. He will be asking them how the government can better serve them. His Department of in-Justice has also issued warnings against those who use social media to speak against Muslims, threatening that it violates their civil rights.

Obama and his criminal syndicates have also advocated for the murder of children in the womb 241 times since he took office. This “grown-up fetus” even went so far as to block the protection of a child born alive during an abortion to be sure the child is snuffed out. He has declared a war on women by attempting to force all Americans to fund Planned Parenthood. Obama also wants to force the church in America to supply birth control for women as well, because he wants to promote the church’s doctrine of a moral, healthy lifestyle for women … right?

Decades of medical evidence have revealed that abortion carries significant psychological risks; including increased risks of depression, anxiety and suicide. Abortion is proven to harm the soul of a woman while killing the life of an innocent child (Proverbs 6:17).

That, my friends, is a war on women!

Obama pretends to care about women and children, but the facts show the complete opposite. Over 4 million babies have been slaughtered in the womb during Obama’s presidency.

Another ironic twist is that while Obama and his minions claim to be concerned that women have equal rights, no other president has praised radical Islam (which is renown for persecuting women in horrible degrees) more than Barack Hussein Obama. From the moment he took office, he has used his bully pulpit to pander to the radical Islamic community, as mentioned above (Leviticus 26:15-17).

Radical Islam is known for the dreadful practice of “honor killings,” in which girls who lose their virginity or become too “Westernized” are killed by their own families. A woman is continually subject to abuse, rape and violence. If they flee from a marriage arranged by the family, they will be tracked down and killed – stabbed, shot, drenched in petrol and set alight, drowned, run over or poisoned.

Coming from a president who pledges American taxpayers’ money to fund the murder of babies and to terrorist organizations such as the Muslim Brotherhood (whose goal is to implement Shariah law), who is really waging a war on women?

Watch the highly disturbing 3-minute video below, which shows one of 5,000 “honor killings” (outside of the womb) per year in the name of Obama-approved radical Islam: