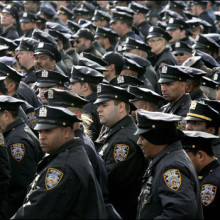 I guess New York hasn’t brought the hammer down hard enough on its citizens, so a new bill is moving through the State legislature which would make it a crime to annoy a police officer. Just think of the far reaching consequences of this measure.

The bill, passed by the State Senate on Wednesday, makes it a felony to “harass, annoy, threaten or alarm” an on duty police officer.

A press release from the NYS Senate originally stated, “The bill (S.2402), sponsored by Senator Joe Griffo (R-C-I, Rome) would make it a felony to harass, annoy, or threaten a police officer while on duty.” However, as the bill is written, a person would be guilty of aggravated harassment of a police officer if he or she subjected that officer to physical contact with the intent to “harass, annoy, threaten or alarm” that officer.

The bill was sponsored by local Senators Pat Gallivan, George Maziarz and Michael Ranzenhofer, as well as Senator Joe Griffo (R) of Rome.

Griffo stated, “Police officers who risk their lives every day in our cities and on our highways deserve every possible protection, and those who treat them with disrespect, harass them and create situations that can lead to injuries deserve to pay a price for their actions.”

Anyone found guilty under the bill, should it become law, could face up to four years in prison.

The bill reads in part:

While there is some additional language in this bill that refers to true physical contact, it also throws in the little phrase “with the intent,” which really gets to the issue of what people are thinking rather than what they are doing.

Many police officers do not like to be videoed. In fact, there have been several confrontations of officers confiscating people’s video recordings simply to erase them. Would they begin to consider this under this bill?

The Supreme Court has ruled that it is perfectly legal and lawful to video record police officers out in public. However, there have been many police officers who have said that being videoed is annoying and harassment.

The ACLU has even created an application for smart phones that helps you to record incidents in which you encounter on duty law enforcement.

One commenter at WIVB, who identified himself as a police officer, wrote:

“As an Officer myself, we already hLGave (sic) agg assault (agg battery) in place. Believe it or not people there are many good Officers out here and we put our lives on the line. We get yelled at, threatened, disrespected, attacked, murdered and sometimes the harassment even gets close to our families. I’m neither for this bill nor against it. It definitely needs work but the idea of taking someone to jail because they yell at me from a distance is absurd. Yell at me in my face and then I’d have a problem. I just think it all boils down to society and the perception of LE, how kids are raised with the lack of morals in regards to respecting ALL others and property and also there should be more training for Officers on how to deal with being perceived as scum in the public eye. There will always be a few Officers who do not deserve to wear a badge but name a profession without troubled employess (sic)…. not even clergymen are golden anymore. I love what I do and would not change it. Anyhow, as I mentioned before, there are already laws in place.”

I’d say if there are laws in place that already deal with aggravated assault is in place, then there is not need for this law. This seems to be nothing more than an expansion to a corrupt officer’s discretion to define the intent of the person he claims is “harassing, annoying, or threatening” him.

As an example, one New York Homeowner, Emily Good, was arrested by police in Rochester “while standing in her yard and videotaping police officers who were performing a traffic stop in front of her house.”

“When Good insisted on her right to stand in her yard, she was arrested, handcuffed, and taken away in a police car. She was later charged with obstructing governmental administration.” Police said they didn’t feel safe with her standing behind them recording.

See? Wake up New York! They’ve come for your guns, now they’re gunning for you.