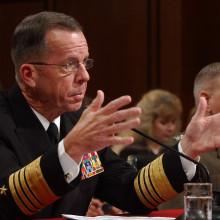 On Wednesday, military veterans and retired special operations officers demanded, in an open letter released by OPSEC, that former Joint Chiefs of Staff Chairman Admiral Mike Mullen be deposed by Congress. The reason they are making the demand is to find out why U.S. forces were not ordered to rescue the four American men who were under attack and died in Benghazi, Libya on September 11, 2012.

Mullen and former Ambassador Thomas Pickering, who gave a lengthy, closed-door deposition on Tuesday, were responsible for issuing the State Department’s Accountability Review Board (ARB) report.

Following Pickering’s deposition, Rep. Matt Cartwright (D-PA) said, “Ambassador Pickering is handling himself like the gentleman that he is. He’s fielding the questions one at a time. There have been no bombshells. He’s being asked about the contents of the recommendations in the [Accountability Review Board] report. He’s handling himself very well. There [has] been a little bit of banter about the propriety of some of the questions, but it really hasn’t gotten out of hand.”

Rep. Jason Chaffetz (R-UT) was disappointed that it took a subpoena to get Pickering before Congress and said there were still a lot more questions that needed to be answered and pointed to the State Department’s stonewalling on providing documents that have been requested.

“We still have the State Department giving us the stiff arm on giving us documents and information,” he said. “It’s unfortunate that you have to get a subpoena to get someone here to share their perspective. But that’s the way they are playing it.”

With that in mind the veterans at OPSEC believe that Mullen could bring to light critical information that has not yet come to light.

“Deposing Ambassador Pickering about the serious gaps in the ARB report is a start but it’s actually his co-chairman, Admiral Mike Mullen, who has some of the most important questions to answer,” the veterans wrote in an open letter released by OPSEC.

“Until the Committee hears about the unacceptable gaps in the report’s treatment of military response decisions around Benghazi we won’t begin to get a true understanding of what actually happened,” they added.

House Oversight Committee Chairman Darrell Issa (R-CA) said that there are still key questions that need to be answered. When he first requested Mullen and Pickering to provide depositions back on May 13, Issa wrote, “Three senior State Department officials who testified at the hearing criticized the ARB’s work as ‘incomplete’ and flawed because the ARB did not interview key witnesses and failed to hold senior officials accountable.”

The group agrees with Issa’s statement writing, “As subsequent testimony has proven, the ARB report is incomplete and inconsistent with the facts of what transpired during the Benghazi attack. The Committee has a responsibility to seek an explanation from Admiral Mullen as well about those gaps in the report and a transcript of his deposition should be released in full immediately thereafter.”