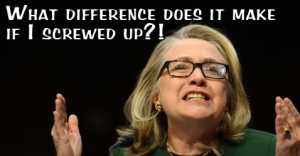 What Difference Does it Make?

Perhaps Hillary Clinton’s now famous outburst, made during her testimony before congress, will do more to end her political career than all her lies and blunders as our Secretary of State combined. One can only hope. Among her serial lies, she asserted that she was unaware that requests for greater security at our Libyan installations were denied by her State Department, while in actuality, the consular security apparatus was reduced. A new congressional report proves that she signed off on the security reductions.  Like her husband this probably makes her a perjurer. Although most of her malfeasance will escape the attention of those who pay little attention as to how they are governed, the video clip of her infamous outburst will no doubt be seen innumerable times if she decides to run for president in 2016. It’s perfect for an anti-Clinton ad campaign because it’s so short and so damning.

But let me try to answer the question posed by her absurd outburst. In my book, Lessons from Fallen Civilizations, I develop a list of ten immutable principles that govern the fall of great civilizations.

My immutable law number one reads:

In 479 BC a few thousand Greek warriors repelled a million Persian invaders.  Less than 150 years later the Greeks could only muster the soldiers from two city states, from Thebes and Athens, to oppose to the invading Macedonians led by Phillip II and his son, Alexander the Great.  And in one lost battle, the freedom of Greece, where democracy was born, vanished.  The Greeks remained a captive people for over two millennia.

It matters, Madam Secretary, because you and your boss did nothing, before and during the attack, to protect our men and women who you put in harm’s way.  It matters because it makes you unfit to send men and women into combat.  It matters because if you were to become president and or your boss stays in office, our men and women may not want to lay down their lives for the likes of you. Recruitment and dedication to duty within our military, at some point, can plummet, as is the case in Europe.  During your presidential campaign, you ran ads against Obama asserting that he was not qualified to answer that 3 am crisis phone call. Benghazi matters because it demonstrates thatneither of you are.

Putin, the Reset Button, and Syria:

On one of her first foreign trips Clinton arranged for an international press conference to be held at the beginning of her meeting with Putin in Moscow.  On display was a placard which portrayed a big button which was underscored with what her State Department flunkies thought was the Russian word for “reset.”  Only they got the wrong word  “pereguzka” which translates to “overloaded” or “overcharged.”  And Putin made it obvious to Hillary and all the press in attendance, he was not pleased.  This embarrassing stunt-gone-wrong at the beginning of Hillary’s tenure as Secretary of State was designed to tell the whole world that Bush was a failure as an internationalist and an appeaser.  It unmistakably set the tone for Obama administration’s utterly failed attempt to woe Russia to our side. The Russian world chess Champion, Garry Kasporov, a freedom fighter and brilliant Russia watcher told the Gateston Institute in New York City last week that “Putin can be found connected in one way or another to every instance of violence and trouble on the globe.”

Flash forward to this week, our new Secretary of State jetted off to Moscow to see if he could get Putin to help us with the Syrian civil war.  In response, Putin made Kerry wait three hours before his meeting and fiddled with his pen while Kerry droned on. The next day with his Russian counterpart, Sergei Lavrov, standing next to him, Kerry announced a Russo/American peace plan for Syria.  Kerry proclaimed, “We’ve affirmed our commitment to a negotiated settlement as the essential means of ending bloodshed.”

To say that this peace plan is riddled with trip wires of failure would be an understatement.  It assumes, like so many failed Middle Eastern peace plans of the past, that the forces of moderation will cause the armies of blood-thirsty jihadists in their midst, those who long for a new caliphate and the destruction of the West, to stand down (to use the Benghazigate term). I think Kerry was on a fool’s errand precisely because his trip was one more example of how the hapless Obama administration can’t face facts.  Putin can’t be an honest partner in this so-called peace process. He was and still is a dedicated Soviet KGB man whose life’s mission is settling scores with the US for our winning the cold war and bankrupting his beloved Soviet empire. He hates us as much as the Islamists do. Therefore he inclines to side with them, especially if he can see that they can do damage to US interests.

It’s typical Obama naiveté to be laboring under the self-delusion that Putin can be brought to our side just because this administration proclaims its hatred of everything Bush and is willing to appease. Putin is selling advanced weaponry to both Iran and Syria. His staunchest ally in the world is Syria with the relationship with the Assad family going back decades when the Soviets were given a base and warm-water port there.  Putin doesn’t want our friendship. He wants our demise. He clearly looks upon Kerry’s entreaties with the contempt of a tyrant.  So much for the “reset button” with Russia.

From the Worst to the Dumbest The situation in Syria has one parallel to the Benghazi hearings in congress.  In Syria it is impossible to pick sides. There are no good choices. The Assad regime is a close ally of Iran and supports terrorist groups such as Hezbollah.  The strongest rebel group fighting the Assad regime, the al-Nusra front is aligned with al Qaeda.  Add to this Syria’s chemical weapons stores and you have no good options, arguably a nightmare.  A wider war threatens both Israel and US interests in the region. This situation would be extremely difficult to resolve for a president with excellent diplomatic skills, experience and instincts. Obama has shown himself to be clueless in this high-stakes international arena. He is out of his league.  President George W. Bush observed, “Running American foreign policy is like playing chess in three dimensions.”

The Syrian parallel to the Benghazi hearings is this. We have no good options.  If the hearings lead to the impeachment or resignation of Obama, the country ends up with Biden who could run in 2016 as an incumbent!  This would be very bad because this is a man who, over the last four decades, has voted against practically every weapons system the country has developed, every weapons system that keeps us safe.  He has voted against missile defense every time he had the chance.  In the Benghazi hearings, in an increasingly dangerous, menacing world, we are faced with two bad choices, between being governed by a president that is our worst or our dumbest.

Larry Kelley regularly presents his political perspectives on various talk show radio programs, publishes his own political column titled, News From the Front and authored the book, Lessons from Fallen Civilizations: Can a bankrupt America survive the current Islamic threat?