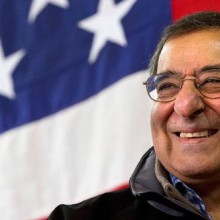 Former Central Intelligence Agency Director and former Defense Secretary Leon Panetta revealed the name of the Navy SEAL team that carried out the raid on Osama bin Laden at a June 24, 2011 ceremony. He also named the unit’s ground commander. The information was classified, yet the ceremony was attended by “Zero Dark Thirty” filmmaker Mark Boal. The ceremony took place a little over a month prior to the team’s helicopter was shot down by a Taliban-fired rocket-propelled grenade.

Panetta also discussed classified information designated as “top secret” and “secret” during his presentation at the awards ceremony, according to a draft Pentagon inspector general’s report published Wednesday by the Project on Government Oversight.

A source close to Panetta said Wednesday evening that he was unaware anyone without the proper security clearances was present at the event, which included both CIA and military personnel.

The leaked version of the report does not address whether Panetta knew Boal was present at the ceremony, held under a tent at the CIA complex on June 24, 2011. “Approximately 1,300″ people from the military and the intelligence community were on hand for the event, according to a CIA press release issued the following week.

The disclosure of the IG report could undermine the Obama administration’s claims that senior officials have not leaked classified information. Last spring, Republicans publicly attacked President Barack Obama and his top aides, alleging that the administration leaked national security secrets to burnish Obama’s standing for his reelection bid.

Word that Panetta, a key member of Obama’s national security team, might have been responsible for improper disclosures without encountering any known repercussions comes as the administration faces questions over the fairness of the aggressive anti-leak investigations and prosecutions being mounted by the Justice Department.

“During this awards ceremony, Director Panetta specifically recognized the unit that conducted the raid and identified the ground commander by name,” according to the draft, which was leaked to the Project on Government Oversight (POGO). “According to the DOD Office of Security Review, the individual’s name is protected from public release’ under federal law.”

Republicans had accused the Obama administration of working with filmmakers on the bin Laden raid in order to boost Obama’s reelection prospects. The criticisms resulted in the film being released after the election.

POGO reported that there was “consternation” among IG staffers that the report had not been released, as there was a push to make the findings public as early as a year ago.

Inspector general spokeswoman Bridget Ann Serchak said in an email that the report was not yet completed.

“While we do not have a projected date of completion for the referenced report, we are working diligently to complete the project as quickly as possible,” she said in an email. “Once it is released, if it is unclassified, it will be posted on our Listserv and in our newsletter as well as on our website.”

The inspector general draft report says that the special operators believed the June 2011 awards event would be a small affair, but it wound up as a “huge enormous event,” said Jeremy Bash, who was chief of staff to Panetta at both the CIA and Pentagon.

The report quotes him as saying that it was “not a highly sensitive event.”

An anonymous source that claims to be close to Panetta said that the former Defense Secretary was unaware that anyone that was at the ceremony was there without the proper clearances.

According to the anonymous source, “He has no idea who all is in the audience. He was told everyone got the requisite clearances.”

Rep. Peter King (R-NY) said that he wouldn’t be surprised if Panetta didn’t know that Boal was in attendance. He doesn’t believe the revelation was intentional. However, he did criticize the CIA.

“CIA was very sloppy and the administration was very sloppy in enforcing security procedures when it came to Hollywood,” King said in a telephone interview with the Huffington Post. “It almost seems as if they were star-struck.”

Josh Gerstein writes, “It’s unclear what Boal did, if anything, with the information he heard at the ceremony. The commander recognized by Panetta does not appear to be identified in the film.”

“Boal was invited by [CIA] Public Affairs to absorb the emotion of the event,” the source close to Panetta said.

One wonders if this revelation was in anyway used in the downing of the helicopter carrying the SEALs resulting in their deaths.